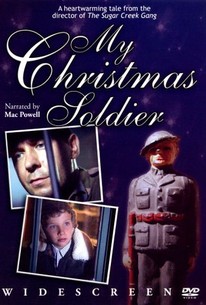 It's Christmas Eve in 1943; in a small Georgia town two young children await their father's return at the local train station as the adults around them whisper about the unspeakable atrocities committed by Axis forces. Eleven year-old Gordy (Aiden Rogers) and his sister Priscilla (Emily Jordan) can't quite make sense of the propaganda posters and hushed conversations, yet a profound sense of sadness and fear swells somewhere deep within both children. Later, when a train transporting German POWs pulls in to the station, Gordy manages to overcome his fear and tenuously approaches the prison car. There, he connects with a young German soldier named Hans (Silvio Busch). Gordy and Hans each face uncertain futures, but together on this crisp December evening they will both come to a common understanding about Peace on Earth and Goodwill Towards Men though the traditional Christmas song "Silent Night".

Critic Reviews for My Christmas Soldier

There are no critic reviews yet for My Christmas Soldier. Keep checking Rotten Tomatoes for updates!

There are no featured reviews for My Christmas Soldier at this time.