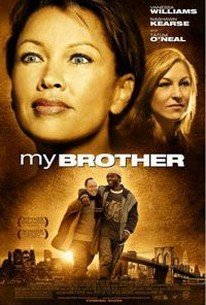 An aspiring stand-up comic realizes precisely how precious the developmentally disabled brother he so frequently took for granted truly is in writer/director Anthony Lover's sensitive family drama. Poetically told by his terminally ill mother L'Tisha Morton (Vanessa Williams) that he and his developmentally disabled brother James (Christopher Scott) share a single soul despite having separate bodies, resentful thirty year-old Isaiah (Nashawn Kearse) longs to explore his stifled independence by testing his meddle on the comedy club circuit. When his dreams go up in smoke, Isaiah falls back on a courier job - initially assigned the task of delivering a mysterious package for an intimidating gang of Middle Eastern thugs. Later, when the package goes missing, the goons who hired Isaiah arrive at his apartment to rough up the frightened courier and his unsuspecting sibling. It's only then, when faced with the prospect of their own mortality, that Isaiah truly begins to comprehend the true depth of his brotherly bond with James.

Len Fero
as Louie
View All

Critic Reviews for My Brother

A moralistic black drama that makes its points with a heavy hand and unconvincing story developments.

A young man takes an awfully long time to discover what the audience already knows -- that his disabled brother is the most precious thing in his life -- in My Brother.

Its earnest tone, moving orchestral score and strong cast carry it past the rough patches.

My Brother is a brave little film, with the emphasis on little. Shot on a shoestring, it lacks the polish of many indie efforts but compensates with bold casting and a big heart.

My Brother is brimming with would-be life lessons. But the movie goes in so many directions, and follows through on so few of them, that all it transmits is a vague glow. It's watered-down chicken soup for the soul.

Has no shortage of heart, but it has been so clumsily organized and falls back so often on clichéd storytelling that any early goodwill quickly morphs into resentment.

Story loses momentum in a wave of heavy-handed messages.

[A] torpid, independently made urban melodrama.

A moving and meaningful melodrama about a blood bond tested by the trials and tribulations of trying to survive in the inner-city.

Audience Reviews for My Brother

There are no featured audience reviews yet. Click the link below to see what others say about My Brother!