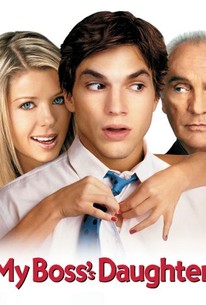 Anarchic comedy veteran David Zucker directs hot young thing of 2003 Ashton Kutcher in the fast-paced romantic comedy My Boss's Daughter. Kutcher plays rookie executive Tom Stansfield, who wants to impress his demanding boss, Jack Taylor (Terence Stamp), and win the heart of said boss' conventionally attractive daughter Lisa (Tara Reid). In order to achieve these ends, he agrees to housesit at their palatial mansion for one night. Chaos ensues throughout the evening as rowdy houseguests show up with various means of disruption. Molly Shannon plays Jack's former employee Audrey and Andy Richter appears as Lisa's brother Red, who's on the run from nasty drug dealers. Cameos come from Carmen Electra, Ever Carradine, and the like.

Ever Carradine
as Julie

Carmen Aguirre
as Executive No. 1

Mark McConchie
as Executive No. 2

Susan Breslau
as Executive No. 3

Critic Reviews for My Boss's Daughter

The only real physical comedy in My Boss's Daughter comes from Zucker, Dorfman, and Kutcher stumbling over each other, but it's unlikely anyone will laugh.

Comedy's cardinal rule is never make it look hard, but that wisdom is ignored in My Boss's Daughter.

I believe in a movie's right to die.

The spectacularly unfunny supporting cast -- including Dave Foley, Jeffrey Tambor and David Koechner -- doesn't help either. But luckily Kutcher is there to try to clean up the mess.

Zucker ... directs this mess like a substitute teacher soldiering through a day's work for a day's pay at a decertified school.

The real disaster is the slapstick-ridden script, which a great supporting cast is powerless to salvage.

A pretty good cast and a pretty good director are pretty much wasted in My Boss's Daughter.

My Boss's Daughter is a stinker from start to endless finish.

The direction of David Zucker is as uninspired and numbing as the script.

Few films are as consistently pathetic.

Audience Reviews for My Boss's Daughter

Funny!!! An outstanding comedy performance by Ashton Kutcher!!! He just make me wanna kick him, punch him, and u know all the bad things because of his stupidity....

Outrageously funny with Ashton Kutcher who 'babysits' his boss's house that becomes a 'madhouse'. But I like the accidentally scenes on Terence Stamp where he was hanging on the tree that makes me laugh!