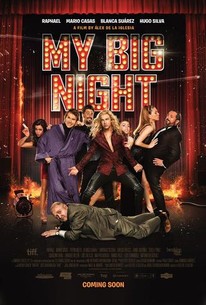 A New Year's Eve celebration becomes more than bargained for.

The Jungle Book is Certified Fresh

My Big Night bears the stamp of Pedro Almodóvar's romantic comedies, and it's worthy of his best.

Delirious, over-the-top, gorgeous to look at and with comic timing delivered at a machine-gun pace ...

I laughed a lot at My Big Night and can't recommend it highly enough.

Thanks to his editor, Domingo González, Mr. de la Iglesia skillfully keeps these many balls in the air, a palpable affection for his players seeping through.

De La Iglesia is one of those directors who always gives off the impression that's he's having the time of his life, and he packs My Big Night with exaggerated angles, pops of super-saturated color, and pop-culture winks.

It is true that it doesn't touch the sky in many occasions, but even in its lowest moments it does not fall into hell either. [Full Review in Spanish]

It is entertaining at times, and shooting in a thousand directions, manages to hit a target. [Full Review in Spanish]

The police confronting protesters, an image in which Alex de la Iglesia opts for a decision that seems genius to me: all faces are obscured, all are equal. [Full Review in Spanish]

Surely the Spanish audience got more from local pop culture references and in-jokes, but the headlong pace and bumptious good cheer is infectious.

Many references in My Big Night will likely fly over the heads of those not conversant in Spanish pop culture, such as the unknown-to-Americans superstar Raphael riffing on his own image, but it's goofy fun regardless.