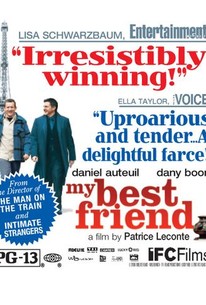 Critics Consensus: Although the plot may sound contrived, the performances of Daniel Auteuil and Dany Boon manage to turn My Best Friend into an earnest and witty romp.

Critics Consensus: Although the plot may sound contrived, the performances of Daniel Auteuil and Dany Boon manage to turn My Best Friend into an earnest and witty romp.

Critic Consensus: Although the plot may sound contrived, the performances of Daniel Auteuil and Dany Boon manage to turn My Best Friend into an earnest and witty romp.

François is a middle-aged antique dealer. He has a stylish apartment and a fabulous life, but at a dinner with a group he considers his dearest acquaintances, he is blindsided by the revelation that none of them actually likes him. He's arrogant, self-centered and harsh, and they don't believe he knows the meaning of friendship. His business partner Catherine makes him a bet: if he can produce his best friend, she will let him keep the massive Greek vase he acquired that afternoon on the company tab. If not, it's hers. Having accepted the wager, François naively tears through his address book, trying to shoehorn an increasingly unlikely series of contacts into the all-important role. Moving through Paris, he keeps encountering a trivia-spouting, big-hearted cabbie named Bruno. Bruno's chatty, lowbrow ways grate against François' designer temperament, but he covets the other man's easy way with people. He convinces Bruno to teach him how to make friends and sets about learning the "Three S" rule: being sociable, smiling and sincere--although, for him, they don't come easy. Ultimately, François' victory will depend on Bruno's naiveté in playing along, but what's the cost of cheating at friendship?

Etienne Draber
as The Speaker

News & Interviews for My Best Friend

View All My Best Friend News

Critic Reviews for My Best Friend

Patrice Leconte has taken a story about male friendship, in all its posturing and potential vulnerability, and turned it into a light, smart, crowd-pleasing comedy.

You might well find it very silly, but it grew on me, and it's certainly based on an interesting premise.

Auteuil and Boon's appealing performances keep the film engaging throughout, but it's easy to pine for a dark, challenging film with this premise, pitched more toward a harrowing emotional reckoning than this film's ambiguous but inevitable happy ending.

It's better when it's threatening, but Leconte knows his audience.

One looks to Leconte for some of the finest, most sophisticated and compassionate filmmaking coming out of France, not for a situation comedy.

A sweetly surprising treatise on friendship.

Leconte has crafted an at once thoughtful, engaging, lighthearted, and melancholic entertainment about loneliness and friendship

This is a movie that sneaks up on you and grabs your heart before you know it. I would want to watch it with my best friend.

French though it may be, My Best Friend effectively addresses what is a universal human condition.

It isn't always believable, but it is entertaining and funny, with an edge to it.

A wonderful, rare film that portrays one of the most under-represented but universal human neuroses: the desire for friendship or platonic love.

Few films so directly address the question of friendship, the nature of friendship, and, most of all, the illusion that our acquaintances and our friends are the same thing.

Audience Reviews for My Best Friend

I was drawn in by Julie Gayet, uplifted by Dany Boon and mesmerized by Daniel Auteuil. Delightful and light-hearted.

Enjoyable French comedy. Struck a chord with me - I could relate to the socially awkward main character!

Corny contemporary French take on a classic Dickens tale. Auteuil's Scrooge-like character has to prove he's capable of having a best friend in this humorous easy-watching movie.