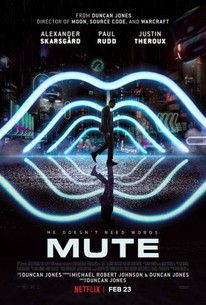 Critics Consensus: Visually polished but narratively derivative and overall muddled, Mute is a would-be sci-fi epic whose title serves as an unfortunate guide to how it might be best enjoyed.

Critics Consensus: Visually polished but narratively derivative and overall muddled, Mute is a would-be sci-fi epic whose title serves as an unfortunate guide to how it might be best enjoyed.

Critic Consensus: Visually polished but narratively derivative and overall muddled, Mute is a would-be sci-fi epic whose title serves as an unfortunate guide to how it might be best enjoyed.

Berlin, the future, but close enough to feel familiar: In this loud, often brutal city, Leo (Alexander Skarsgård) - unable to speak from a childhood accident - searches for his missing girlfriend, the love of his life, his salvation, through dark streets, frenzied plazas, and the full spectrum of the cities shadow-dwellers. As he seeks answers, Leo finds himself mixed up with Cactus Bill (Paul Rudd) and Duck (Justin Theroux), a pair of irreverent US army surgeons on a mission all their own. This soulful sci-fi journey from filmmaker Duncan Jones ( Moon, Source Code, Warcraft) imagines a world of strange currencies in which echoes of love and humanity are still worth listening to.

Worth checking out once you've seen Netflix's Annihilation, but before you get into Altered Carbon.

Mute is pretty meh but gets points for randomness.

Skarsgård is just frustratingly silent and dull, to the point where it feels less like he's a mute and more like he's just doing the whole hard-boiled, Liam Neeson, no-need-for-words-when-I-can-thump-henchmen-with-my-table-leg character thing .

But it's never a great sign when your lead is upstaged by the supporting players, and for all its good looks, "Mute" ultimately doesn't have a whole lot to say.

[Paul] Rudd and [Justin] Theroux do their best to have fun, but the movie's miserable tone is actively competing against them at every turn.

Mute gets so caught up in the mystery aspect of the story that all logic swirls together with nonsense resulting in this muddy sci-fi diarrhea with head scratching character turns and questionable reveals that aren't fully explained.

It gives the impression that the project is conclude before screenplay studies and some quality control that could solve the mistakes. [Full Review in Spanish]

Sadly, the interesting cyberpunk backdrop isn't paired with a story that delivers any excitement, suspense or thrills to speak of.

Skarsgård is a fine actor, but between his lack of spoken dialogue and a character written with as much personality as the bedpost he wields in combat, he's seldom engaging.

Duncan Jones tried to make something compelling with Mute... but his movie is just a disappointing mess. [Full review in Spanish]

This is a very visually interesting film but that is about the only positive thing I can say about this messy film. Jones has failed to deliver an interesting world building follow up to his debut film Moon. The biggest issue I had was with the characters, not one of them had any true complexity and you couldn't relate to any of their motivations. Rudd is the standout, in a rare villainous role and the layers his characters has are rather unexplored. The storyline is genuine mess of conflicting ideas, I fear Netflix bought into the concept without learning of the true nature of the script. Netflix are starting to produce or purchase a lot of films that are not critically acclaimed. This film has a few glimpses of the previous film Moon and they are more interesting then this entire film, I would much rather be watching a true sequel to Moon. This film attempts to be like Brazil with the quirky characters and world but sadly it fails on all fronts. I can only hope Jones can bounce back from this film and deliver something along the lines of Source Code or Moon. 10-03-2018.

Science fiction films are always tricky to pull off, but if you have a good story on your hands, everything weak could possibly fade away. That being said, one of Netflix's most recent releases in Mute is an example of a film with a great setting, great premise, and great characters, that still manages to fall flat on its face. I was looking forward to this movie since I first heard the logline a few months ago, and seeing that Duncan Jones was at the helm as director only excited me more. There are aspects of this film to admire and praise once the credits roll, but the overall execution and where the story ends up was very messy. Here's why I think you should completely avoid this movie, unless you're just looking to get a kick out of a visual world, regardless of quality. After an accident when he was a kid, Leo was left without a voice. Now a bartender with a girlfriend, he's faced with incredible odds when she goes missing. Determined to find her, he goes up against the city's gangsters and worst criminals. That premise alone is what got me hooked and wanting to watch this film on day one of release. That being said, the way this film plays out is one of the most disappointing viewings I've had in quite some time. Picture a film like Blade Runner setting up the amazing world that it does, but not really having a compelling story or anything really to say to its audience. That's how I felt when watching Mute. When a movie sets up a premise, it's pretty fair that audiences should be expecting for the movie to deliver on its payoff. Mute doesn't exactly accomplish that because it relies too much on the side characters and derails itself from its core storyline. I found myself wondering why so much focus was being put on Paul Rudd's portrayal of Cactus and Justin Theroux's Duck. Alexander Skarsgård has been cast in so many properties, but never truly given a chance to shine. Sadly, I think this is the best performance he's ever given, which is a huge shame, due to the fact that this movie doesn't do it justice in any way. Aside from the way this movie plays out, there are a few things to commend here. As I said, I thought Skarsgård was stellar here and it's always nice to see Rudd in a dramatic performance. In terms of setting up this world, I thought director Duncan Jones did a great job. There are some pretty memorable sequences sprinkled throughout Mute and even some of the visuals are decent, but it still doesn't amount to much when many of these aspects are also negatives. A great scene means nothing if your overall movie is lacking and solid visuals in certain moments are worthless if others feel like they're from the 1990s. Quite honestly, Mute is the definition of a movie that tries very hard and fails miserably in its execution. In the end, Mute is commendable for many reasons. Honestly, I felt the same way about this movie that I did toward Warcraft. Duncan Jones has proven himself to be a very talented director with his work on either Source Code or Moon, but his blockbuster debut in Warcraft set up a nice world but didn't expand on it enough to really create any intrigue. Mute suffers from those exact same issues, making Jones a very hit-or-miss director now. Upon first glance, I would've called him a director to really look out for, but it seems like he's really trying to go big or go home these days. Mute is fine for a few isolated moments, but as a whole, it's very, very weak.

Jones' attempt at a futuristic Film Noir set in Berlin is a depressing, unfocused mess. While there is probably a reason for the focus switching between seemingly unconnected characters, none of which are particularly likable even if the actors usually are, it does a great disservice to the plot, which feels basically non-existent for two thirds of the film. Sure, the world building in a Blade Runneresque version of Berlin, but much more colorful and shallow, has a few highlights. And there is a fantastic Easter Egg to Jones' debut Moon. The ending works too. But the path there is so weird, uneven and sometimes uninteresting, it's a pity. I really wanted to like this, but it worked on basically no level.