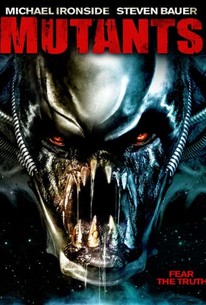 A mad scientist inadvertently unleashes the apocalypse while attempting to create an addictive additive for a greedy manufacturer. Instead of creating an army of compulsive consumers, it turns regular people into frenzied mutants. When the infection begins to spread at an alarming rate, it's up to the head of security and his girlfriend to contain the threat or die trying. Michael Ironside and Steven Bauer star.

I cannot fathom anyone watching Mutants and finding anything about it worth recommending.

Wow....that was bad. This definately deserves to be on Chiller or SyFy. They just didn't make it look right. And sugar? Really? Sugar? They could of made it alot more interesting if they put in more interesting scenes that even show mutants. HORRIBLE!

Wow this was so bad. . terrible acting horrible everything . . i love me some b movie sci fi but this . .this was horrendous.