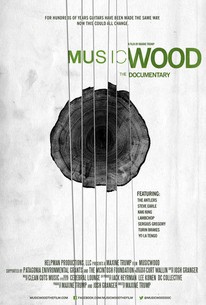 Musicwood is an adventure-filled journey, a political thriller with music at its heart. An unusual band of the most famous guitar-makers in the world (Bob Taylor of Taylor guitars, Chris Martin of Martin Guitars and Dave Berryman of Gibson Guitars) travel together into the heart of one of the most primeval rainforests on the planet. Their mission: to negotiate with Native American loggers and change the way this forest is logged before it's too late for acoustic guitars. The film begins with a startling revelation: a Native American corporation is logging their own homeland - clear-cutting enormous tracts of forest. If this logging doesn't change, they will run out of acoustic-guitar quality Spruce in less than ten years. Musicwood is a culture clash of staggering proportions. Native Americans who've been given a notoriously raw deal from the US government are distrustful of the white man telling them what to do. Enter Greenpeace, a radical environmental group, and soon all are battling over a forest that is the last of its kind on the planet. As the tug-of-war over natural resources unfolds, acoustic virtuosos such as Kaki King, Yo La Tengo, The Antlers, and Steve Earle offer some of the most profound insights in the form of a soundtrack, which doubles as the heartbeat of this debate. (c) Official Site

This compelling, eco-themed documentary will be of vital interest to anyone who loves acoustic guitars.

Even if you can't tell the difference between a soundboard and a fretboard, "Musicwood" will hold your attention.

A riveting tale of environmental crisis and industrial conflict with a commitment to depth and a musical cadence.

As a visibly agitated Greenpeace activist puts it, "the only thing that f***ing matters is the forest" and that, you feel, is the crux of it.

Musicwood is a great looking documentary; the cinematography in this one is breath-taking and even the simplest of talking heads segments look good.

A lyrical film, with evocative cinematography and emotive yet insightful interviews, Musicwood carries its tune well and is well worth seeking out.

Why preserving the Martin guitar is as important in the long run as saving the spotted owl or the snail darter.

A pointed look at the relationship between art and commerce that brings acoustic-guitar manufacturers and logging corporations to a crossroads, if not an outright impasse.

An excellent and entertaining documentary.

There is widespread concern for human rights and animal rights of every stripe, but after seeing Musicwood, I am now a firm believer in plant rights.

The forests are breathtaking. So is the sincerity of musicians such as Steve Earle, who waxes poetic about the glories of what emanates from acoustic guitars. These aren't tree-huggers, they're tree-players.

There are no featured reviews for Musicwood at this time.