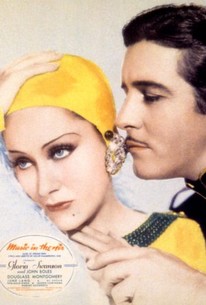 Music in the Air Photos

The 1932 Jerome Kern-Oscar Hammerstein Broadway hit Music in the Air was brought to the screen two years later by Fox Studios. Temperamental Bavarian prima donna Frieda (Gloria Swanson) and equally volatile lyricist Bruno (John Boles) spend half their time quarrelling and the other half making love. To arouse each other's jealousy, Frieda and Bruno pair off respectively with music teacher Lessing's (Al Shean) virginal daughter Sieglinde (June Lang) and her schoolmaster fiancee Karl (Douglass Montgomery). The impressionable young couple respond to the attentions heaped upon them until they realize they're being used, whereupon the tables are turned upon the main characters. Though boasting such lilting tunes as "The Song is You" and "I've Told Every Evening Star" and the stylish direction of Joe May (perhaps his best American film), audiences didn't respond to Music in the Air; as a result, star Gloria Swanson vowed for the millionth time to "permanently" retire from pictures, a promise she kept to herself for a whole seven years. Incidentally, one of the screenwriters of Music in the Air was Billy Wilder, who later co-wrote and directed Swanson's 1949 "comeback" feature Sunset Boulevard.

Marjorie Main
as Anna the Maid

Critic Reviews for Music in the Air

[Music in the Air] marks the return to the screen of Gloria Swanson in what is surely the most triumphant come-back of the year. Her Hollywood rivals can take one look at this picture and then go home and cry their eyes out.

There are no featured reviews for Music in the Air at this time.

Music in the Air Quotes