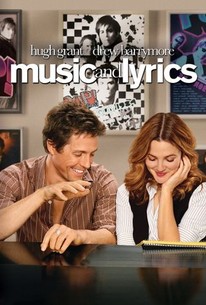 Critics Consensus: Music & Lyrics is a light and pleasant romantic comedy that succeeds because of the considerable charm of its co-stars. The music segments featuring Hugh Grant are worth the price of admission.

Critics Consensus: Music & Lyrics is a light and pleasant romantic comedy that succeeds because of the considerable charm of its co-stars. The music segments featuring Hugh Grant are worth the price of admission.

Critic Consensus: Music & Lyrics is a light and pleasant romantic comedy that succeeds because of the considerable charm of its co-stars. The music segments featuring Hugh Grant are worth the price of admission.

A professional collaboration between a popular lyricist and a washed-up musician takes a decidedly personal turn as the pair gradually finds their relationship developing into something much deeper in a romantic comedy directed by Marc Lawrence and starring Drew Barrymore and Hugh Grant. Alex Fletcher (Grant) may have been all the rage in the 1980s, but these days he's lucky to get a gig playing at the local county fair. Just when it seems as if things couldn't get any more bleak for the dejected has-been rocker, reigning pop diva Cora Corman (Haley Bennett) offers Alex the opportunity of a lifetime -- write and record a duet to be sung with her and watch his career receive a much-needed boost as the nostalgia-crazed public laps it up. Little does Cora realize that not only has it been years since Alex has written a song, but he's never actually written a single lyric. Now, if he hopes to make the comeback needed to save him from a life of complete and utter obscurity, Alex will have to craft a radio-friendly hit in a matter of mere days. Luckily for Alex, his quirky plant-keeper Sophie Fisher (Barrymore) has quite a way with words and may possess just the kind of songwriting talent needed to make such a hit happen. Unfortunately the beguiling Sophie is still reeling from a recent break-up with newly famous novelist Sloan Cates (Campbell Scott), and she isn't quite sure if she's ready for any kind of collaboration right now -- romantic or otherwise. Despite Alex's hesitation to commit and Sophie's reluctance to collaborate, the pair quickly discovers that a little chemistry can go a long way in healing the wounds of the past and laying the foundation for a much-deserved future of happiness and success. ~ Jason Buchanan, Rovi

News & Interviews for Music and Lyrics

View All Music and Lyrics News

Critic Reviews for Music and Lyrics

It's more fun than a Spandau Ballet/Tears for Fears concert circa 1985, and I mean that in a good way.

This isn't just a chick flick wallowing in moon-spoon-June levels of Hallmark mush; it's the 'Macarena' of cut-rate rom-coms.

We're clearly deep into romantic-comedy territory here, so it's a good thing we're also in the hands of excellent guides.

I don't think the ending is up to the rest of the movie, but Grant and Barrymore are great together, and the movie has both zing and song.

Drew Barrymore is that rare movie starlet who can handle the comedy end of romantic comedy, but she coasts through her underwritten role as a goofy plant sitter recruited by Grant to write his lyrics.

Hugh Grant and Drew Barrymore are another match made in silver screen heaven.

Move beyond the lame title, and you'll find an unexpectedly good movie, with the inspired casting of Drew Berry and Hugh Grant possessing the necessary chemistry to lift this rote, manufactured story into something appealing.

Far too little originality ... to make the film anything other than a disposable rom-com triviality.

Music and Lyrics could have had more rhythm and a better beat...

Audience Reviews for Music and Lyrics

Love this movie. Okay, I think it's more than a bit a rehash of The Wedding Singer, but I can excuse that because it's just such fun to watch! I love the Pop song too, even though Hugh Grant probably shouldn't sing. I have to admit after my first rewatch in years, I upgraded this to five stars and got on eBay looking for the soundtrack! Cora is a great character too, I enjoyed her parts. Drew Barrymore need I say more. She does these funny rom com roles so well, and her clothes are beautiful here too. The bit where Hugh's washed up rock star nearly puts his hip out doing his moves on stage gave me a laugh.

Good original rom com. Very catchy music and excellent take on Wham duo. Hugh Grant plays a 80s pop star who has lost his glory. He teams up with a hip new songstress who wants him to write a song for them but he gets writer's block. A girl (Drew) who waters his plants helps him out.

The first five minutes were pure gold and the rest of the film an everlasting backslide. But the two leads are pretty charismatic, so it wasn't, like, a complete waste of time. The love song is nice in a poppy, catchy kind of way.

Certainly a brave romcom as Hugh Grant plays a has been 80's rock star (think: the other guy in Wham, no, not George Michael, the other guy) looking to not has been. That means a singing and dancing Hugh - that's where the bravery comes in, him to do it, and you to watch. Things look bleak for his career dreams (and this film unashamedly links success and romance - you can't have one w/o t'other) until romcom magic happens and in walks Drew Barrymore ... and now I've told you everything. Still not as offensive as one might think given my description.