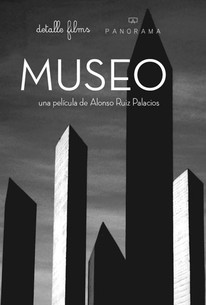 The film tells the circumstances surrounding the theft of several pre-Hispanic artifacts from the National Museum of Anthropology in Mexico City in 1985, and the surprise of the authorities when they discovered that the authors of such a feat had been two marginal young people from the suburbs, Carlos. Perches and Ramón Sardina (García Bernal and Leonardo Ortizgris), instead of the professional art thieves to whom the subtraction of objects was attributed

"Museo" is slightly frustrating on first watch, as its themes lie partly hidden behind Bernal's intentionally abrasive performance and the mix-and-match filmmaking of Ruizpalacios.

Moviegoers looking for the kind of zip found in an "Ocean's" movie may feel a bit lost at sea with "Museo" and its offbeat rhythms and quirky charms. But the rewards definitely will be greater, if you keep an open mind.

Even after the story runs out, it's still a joy to watch.

"Museo" is the work of a genuinely creative directorial talent, and the early family scenes, richly detailed and shrewdly acted, provide just the right emotional context for this squabbling, indecisive gang of two.

With his characters unable to fence the goods, writer-director Alonso Ruiz Palacios has no place to turn but in the direction of head-scratching surrealism.

"Museo" is a fun, stylish, singular heist flick that's about so much more than the theft itself.

[Ruizpalacios] exhibits all the free-wheeling and eye-popping visual confidence of a more seasoned filmmaker, not someone who's delivering just their second feature.

(Museum) is not a caper movie, nor a road movie, not a thriller or an author's movie which transcends genres. At most, it's a bad drama. [Full Review in Spanish]

In making a tale that fictionalizes the perpetrators of a true-crime landmark, Ruizpalacios tells a pulp story that's almost a genre unto itself.

It is only occasionally that its mild tones go beyond the expected, yet even so, it stands as a low-key fun overall with some refreshing takes on the genre.

Ruizpalacios' fictionalized account, even with all its embellishments, has far more honesty in it than any confession could hold.

Ruizpalacios loses his way towards the end...It's a sour note in an otherwise highly watchable hybrid of a film.

There are no featured audience reviews yet. Click the link below to see what others say about Museum (Museo)!