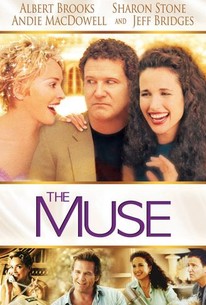 Critics Consensus: Despite quirky and original writing, the subject matter feels too removed to produce laughs.

Critics Consensus: Despite quirky and original writing, the subject matter feels too removed to produce laughs.

Critic Consensus: Despite quirky and original writing, the subject matter feels too removed to produce laughs.

Actor/writer/director Albert Brooks turns his satiric gaze on the film industry in this comedy about a screenwriter who has hit a rough patch. Steven Philips (played by Brooks) has enjoyed a celebrated career in Hollywood, but one day he has a meeting with his agent, who informs him his career is suddenly going nowhere. Steven quickly finds himself at the end of his rope and is unable to put a decent sentence on paper. Desperate, he hears that there's a bona fide muse in Hollywood, Sarah (played by Sharon Stone), who might be able to help with his problems. The writer contacts Sarah, hoping a good, stong dose of inspiration will get his career back on track. However, Sarah's late hours and endless demands don't do much to help Steven's relationship with his wife (Andie MacDowell). The Muse features an original musical score by Elton John, and cameos by several notable film figures, including Martin Scorsese, Rob Reiner, and James Cameron.

Lorenzo Lamas
as Himself

Jennifer Tilly
as Herself

Cybill Shepherd
as Herself

James Cameron
as Himself

Martin Scorsese
as Himself

Ange Billman
as Spielberg Secretary No. 2

Gannon Daniels
as Spielberg Secretary No. 3

Rob Reiner
as Himself

Wolfgang Puck
as himself

A.J. Orta
as Boy in Cookie Store
View All

News & Interviews for The Muse

View All The Muse News

Critic Reviews for The Muse

"The Muse'' is an intelligent, undemanding comedy.

There are bits in this movie that are so bright, so amusing and so truly, madly, deeply tied to a life most of us will never know, that you can't help watching the film with fascination.

The Muse is as consistently funny as it is smartly tooled.

It's imaginative enough to provide a reliable, pleasurable stream of chuckles and midsized laughs.

Like the character he plays here, Albert Brooks needed someone or something to re-inspire him while working on this plodding comedy.

Albert Brooks' mildly amusing satire about the inner workings of Hollywood benefits from Sharon Stone's droll and sexy performance, but as a comedy it's too familiar and not funny enough.

In its story of a terrible filmmaker, it almost manages to explain the madness behind why Brooks still gets to crank out excrement like this.

Squeezes out plenty of laughs at the expense of the Hollywood film community.

Audience Reviews for The Muse

Albert Brooks tale of a Hollywood writer facing the end of his career is unintentionally ironic and kinda sad to watch. The help of major Tinseltown players do little to support a work wherein Brooks himself only comes across as bitter and alienating. Sharon Stone as the titular character: blech. Only Andie MacDowell escapes unscathed. Pass.

I normally like Albert Brooks's films. Obviously Broadcast News and Defending Your Life are fantastic, and in those films, his neurotic, Woody Allen demeanor is charming, clever, and funny. But here he's just annoying and occasionally he's almost creepily over-bearing. As a film, The Muse has a lot of wasted time spent on people driving in the "beautiful" plasticity of L.A. and banal dialogue like "You should call him." [Dramatic pause.] "I'll call him." A film exploring the writing process might have been more interesting, but like his character, I fear Brooks has lost his edge.

It's gentle, warm and funny rather than being a hilarious attack on Hollywood. Yes it captures the natures of Hollywood fads and the shallow nature of the industry, but never in a convincing way. This isn't ALtman's The Player. Some celebrity cameos are quite funny with Cameron and Scorsese parodying themselves, but they do feel rather thrown in at the last minute. Not enough of Bridges, who can own any film, and Brooks just comes off as whiny and stupid. Perhaps it could have been better if the screenplay to Brooks' movie within a movie sounded any good, but all Stone can inspire is a tepid Hollywood idea like so many others.