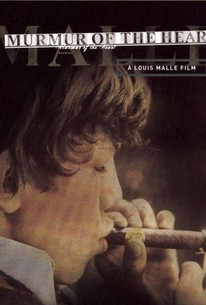 Murmur of the Heart Photos

Nicole Carriere
as the Mother

Lia Wanjtal
as the Mother

Huguette Faget
as the Mother

Isabelle Kloucowsky
as Madeleine
View All

Critic Reviews for Murmur of the Heart

It casts a fresh, vigorous and unclouded eye on adolescence as it really is rather than as we would like it to be.

The theme is treated with faultless discretion and taste, without the smallest nod to current sensationalism.

Malle, as I see it, is saying: to understand today you must appreciate yesterday. The more I think about it the more encouraging and enlightening this appears.

The performances are remarkable, with Lea Massari (remember the girl who disappeared in L'Avventura?) as the mother; Bdnoit Ferreux as the boy, and Daniel Gelin as the inhibited and inhibiting father, sheer perfection.

How [Louis Malle] achieves this effect is beyond me; he takes the most highly charged subject matter you can imagine, and mutes it into simple affection.

The film is elegantly and fluently played, free in movement but discreet in feeling.

This is one of Louis Malle's best films because of his careful study of a youthful age and psychology. [Full Review in Spanish]

The film is funny, attractive, and worthwhile.

the whiff of droll, lighthearted humor partially redeems what is otherwise a gorgeously filmed exercise in smug depravity

I was more than a little taken aback by the smugness of these privileged sorts.

In all their messiness, here are love, sex, society, and family, met with cleansing laughter.

Audience Reviews for Murmur of the Heart

Everything about Le Souffle au Coeur felt familiar to me. Louis Malle managed to make a film that plays like a memory, like something you would remember from more than thirty years ago.

Late 1950s. Laurent belongs to a bourgeois family in Dijon. His mother is an Italian refugee, a sort of Sophia Loren, dazzling and free-spirited in love and motherhood. His father is a stern man, profession: gynecologist. Laurent loves jazz, particularly Charlie Parker, and literature, especially Albert Camus. His two older brothers are reckless, constantly annoying him -although within a certain complicity-. They introduce him to household mischief, tobacco, and girls, express radical political opinions at the dinner table, and seize every opportunity to get drunk.One day, Laurent falls sick with a "murmur in the heart" and has to go off to get a 'cure' in the country. There he must confront many issues that he can no longer ignore with the excuse of 'childhood', including sex, jealousy, and his atypical relationship with his own mother.

All of the performances are incredibly natural and accessible, and although some characters can be very annoying their credibility makes them wonderful. This is all thanks to the fine script, based loosely on some of Malle's personal experiences, like Au Revoir les Enfants. The film is written so consistently that even the most scandalous of conclusions happens in an unaggressive way, as though all along we'd been taught to comprehend. In the end I felt as if I had lived through the events myself and, in spite of its 2 hour run I never lost interest.

The art direction, music and cinematography envelop Le Souffle au Coeur in beautiful details and a golden light; there's always soaring jazz music, and no matter what is happening on the screen, there's a warmth and beauty and tenderness to it. And indeed the film takes on many uncomfortable subjects with great honesty; some of the content is actually very shocking and certainly taboo, even today. But as I mentioned, everything appears like a memory: something you can't change and can't help but look upon with understanding eyes. Not once is judgement passed or is a point of view betrayed. A real masterpiece of filmmaking, the perfect marriage of literary and visual narrative.

The father is a cold fish, the mother a passionate woman, and the three boys are largely uncontrolled and uncontrollable. Were french school boys really that loutish in 1954? For all of their bad behaviour, this was a captivating film. Interwoven with the comedy was a subtle political thread that offered a counterpoint to the main story line. Laurent is not sure what he wants, but knows that he is not content. The story moves slowly until what had to be a shocking ending when it was released, but seems cinematically tame by today's standards. And then it moves lightning fast. In the end, Laurent proves his manhood and is accepted into the company of men by his brothers and his father and with the quiet approval of his mother. Tender and sweet at times, it evokes a time and place unfamiliar to us, but is the better for it.

Superb coming of age French film made in the 70's but set in the 50's, which focuses on an adolescent boy coming to terms with his sexuality and his relationships with his mother, father and brothers. Very tenderly directed, the film features stunning and unforced performances from Benoit Ferreux as lead character Laurent and Lea Massari as his mother. In other hands the subject matter could seem exploitative and unnecessarily controversial, but Louis Malle displays an assured light touch. The period detail is also very impressive and the warm cinematography is another plus. The Criterion DVD features a pristine transfer that makes the film look brand new, and comes with a very well written and informative essay by film critic Michael Sragow. A very fine film indeed.

[font=Century Gothic]Louis Malle's film, "Murmur of the Heart", starts out in 1954 in Dijon.(In the background, the guacamole is about to hit the fan at Dien Bien Phu in Vietnam.) Laurent is a 14 year-old budding intellectual with jazz(particularly Dizzy Gillespie and Charlie Parker, whose music plays wonderfully on the soundtrack) running through his veins. Even though he attends Catholic school, he is disenchanted with religion. His father is a gynecologist, his mother dotes on him and his two older brothers are troublemakers who constantly tease him. One day, Laurent spies his mother getting into a car with a strange man...[/font] [font=Century Gothic][/font] [font=Century Gothic]"Murmur of the Heart" is an enjoyably provocative movie about coming of age that thankfully does not pass judgment on any of its characters. At the beginning of the film, Laurent is shown to be a constant reader and that most of his experience is from books, especially from what he knows about sex. That will change. The movie takes a very playful view of sex and in that it is daringly risque.[/font]

Murmur of the Heart Quotes