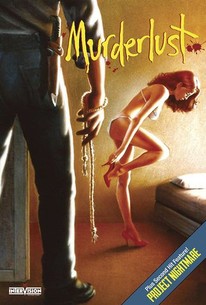 Steve (Eli Rich) is a laconic Sunday school volunteer who is hired as a mall security guard in this uninspired crime thriller. The sexually impotent guard has a hobby of strangling prostitutes, but of course he omits this activity on the job application. His frustration increases when he loses his job, falls behind on his rent, and is forced to take a janitorial job with his cranky cousin Neil (Dennis Gannon). Steve's ultimate goal is to land a job on the adolescent hotline at the church run by his unsuspecting girlfriend Cheryl (Rochelle Taylor). Steve's psychosis increases when the funding for the hotline is delayed until the killer is captured.

There are no critic reviews yet for Murderlust. Keep checking Rotten Tomatoes for updates!

There are no featured reviews for Murderlust at this time.