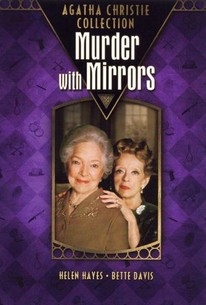 Helen Hayes makes her second TV appearance as Agatha Christie's female sleuth Miss Marple in Murder with Mirrors. Marple has been summoned to the lavish country estate of her old friend Carrie Louise Serrocold (Bette Davis). Carrie's stepson has been killed, and she fears that his won't be the last corpse to befoul the estate. She's right, and the game is afoot for Miss Marple once more, with a full contingent of prime suspects (including John Mills, Leo McKern and Dorothy Tutin). Murder with Mirrors was filmed on location on a genuine 13th century British estate. If Helen Hayes seems more spirited than Bette Davis (eight years Helen's junior), it's because Bette was seriously ill prior to and during shooting.

Critic Reviews for Murder with Mirrors

There are no critic reviews yet for Murder with Mirrors. Keep checking Rotten Tomatoes for updates!

There are no featured reviews for Murder with Mirrors at this time.