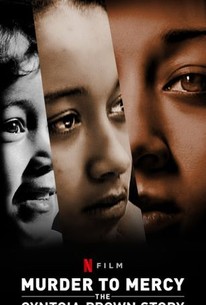 In 2004, 16-year-old Cyntoia Denise Brown was arrested in Nashville, Tennessee, for murdering a 43-year-old man who picked her up for sex. She was tried as an adult and sentenced to life in prison -- Cyntoia's fate seemed sealed. The film shows the complexity of a child who was the product of three generations of violence against women in her biological family. And how in 2019, after nearly 10 years of legal challenges, Governor Bill Haslam granted her request for clemency. He did so following a slow shift in the state for legislative change in juvenile sentencing laws and having seen evidence of her maturity, education, and good behavior as a prisoner.

News & Interviews for Murder to Mercy: The Cyntoia Brown Story

View All Murder to Mercy: The Cyntoia Brown Story News

Critic Reviews for Murder to Mercy: The Cyntoia Brown Story

Murder to Mercy: The Cyntoia Brown Story is what happens when a crime documentary loses sight of its focus.

A moving reflection of what criminal justice reform means in personal terms.

It ultimately does little to elucidate the wider social, racial or political contexts that led to her conviction or commuted sentence. In fact, it leaves enough gaps to make you question its entire point of view.

The filmmaker's narrative and visual approach isn't especially novel in style, but it is compassionate, detailed and persuasive in its assembly.

What begins as seemingly another lurid Netflix true-crime excavation emerges as a considerably more affecting testament to the damage wrought by generation upon generation of sexual abuse.

A sober and interesting look at the justice system.

A sloppy, surface-level glance at a story in need of more meaningful analysis.

It's amazing how time after time we hear stories after story about how a young African-American life is put behind bars. Cyntoia Brown's case made national news, but the real facts and how she has navigated her release did not...until now

...this is a fascinating look at how a criminal and a legal system can change over the course of 15 years.

Cyntonia Brown was sentenced to a life in prison, after killing a man in self-defence aged 16, but Netflix's latest documentary makes it abundantly clear that she was a victim too...

There are no featured reviews for Murder to Mercy: The Cyntoia Brown Story at this time.