Murder at the Presidio2005 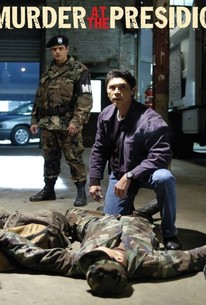 Murder at the Presidio Photos

A military detective uncovers some disturbing truths while investigating a shocking murder in this made-for-cable mystery, based on a true story. James Chandler (Lou Diamond Phillips is a criminal investigator attached to the Army who has a reputation as a hothead who is quick to use his fists, a reputation that precedes him when he's assigned to the prestigious military base in San Francisco. Chandler soon gets an opportunity to show his mettle when the wife of Sgt. Barry Atkins (Martin Cummins) has been killed -- the first time someone has been murdered at the Presidio. While Chandler's superiors believe the killing was part of a burglary gone wrong, Chandler isn't so certain, and with the help of MP Cpl. Tara Jeffries (Victoria Pratt), he digs deep into the case and makes some startling discoveries. Murder at the Presidio also stars Jason Priestley, Eugene Clark, and Daniel Roebuck.

Critic Reviews for Murder at the Presidio

If you dig your cable flicks all but entirely prefabricated and astronomically predictable, feel free to give this one a shot.

Audience Reviews for Murder at the Presidio

Good cast. Based on true story about a homicide on a military base.

Murder at the Presidio Quotes