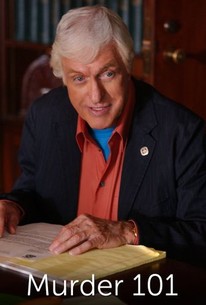 Dick Van Dyke draws heavily from both his classic 1960s sitcom and his later detective-series vehicle Diagnosis Murder as star of the made-for-cable whodunit Murder 101. Van Dyke is cast as Dr. Jonathan Maxwell, a retired detective who teaches a course on criminology in a small-town college. Though he tends to trip over his own feet and bump into doors with alarming regularity, Maxwell's deductive skills are as sharp as ever, as proven when he is called upon to prove the innocence of Cheryl Collins (Tracey Needham), an investigative reporter charged with the murder of corrupt CEO Nelson Raymond (Tony Denison). It is clear that Cheryl has been framed, but who did the framing? Was it Raymond's vindictive ex-wife Louise (Lisa Thornhill), or his shady business associates Max Arnholdt (Bradford English) and Karl Larch (Camren Argeniano)--or could it be the proverbial Least Likely Suspect? Dick Van Dyke's son Barry Van Dyke, who previously costarred with his dad in Diagnosis Murder, is seen as private eye Mike Bryant, while Barry's son (and Dick's grandson) Wes Van Dyke shows up briefly as one of Dr. Maxwell's students. Clearly intended as the pilot for an ongoing series of Hallmark Channel TV movies, Murder 101 first aired on January 7, 2006.

Kirk Bovill
as Enforcer No. 2

There are no critic reviews yet for Murder 101. Keep checking Rotten Tomatoes for updates!

There are no featured audience reviews yet. Click the link below to see what others say about Murder 101!