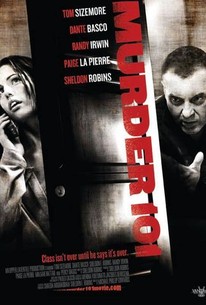 When a brilliant female law student Fiona Reid signs up for Professor Mark Sloan's criminology class, she quickly realizes she has signed on for more than what she bargained for. Within days of Fiona joining the class, a series of sickeningly violent random killings rise up striking fear in the hearts of the local college town student body. The Detective believes a mass murderer has come to town. With a passion for solving crime, fueled by the unsolved murder of her father's death at the hands of a mass murderer days before she was born, Fiona sets about the task of catching the town's new mass murderer. As the murder victims in town grow less and less random and more and more closely connected to Fiona's own life, she starts to suspect those around her. With a surprise ending no one will see coming, the twists never seem to stop in this shocking dark thriller. (c) Official Site

There are no critic reviews yet for Murder 101. Keep checking Rotten Tomatoes for updates!

There are no featured reviews for Murder 101 at this time.