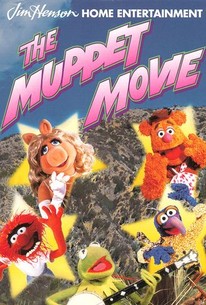 Critics Consensus: The Muppet Movie, the big-screen debut of Jim Henson's plush creations, is smart, lighthearted, and fun for all ages.

Critics Consensus: The Muppet Movie, the big-screen debut of Jim Henson's plush creations, is smart, lighthearted, and fun for all ages.

Critic Consensus: The Muppet Movie, the big-screen debut of Jim Henson's plush creations, is smart, lighthearted, and fun for all ages.

Kermit the Frog is persuaded by agent Dom DeLuise to pursue a career in Hollywood. Along the way, Kermit picks up Fozzie Bear, Miss Piggy, Gonzo, and a motley crew of other Muppets with similar aspirations. Meanwhile, Kermit must elude the grasp of a frog-leg restaurant magnate.

News & Interviews for The Muppet Movie

In Case It Wasn’t Obvious, Don’t Take Your Kids to The Happytime Murders
Best Muppets Ever — Rank Them!
15 Certified Fresh Road Trip Movies

View All The Muppet Movie News

Critic Reviews for The Muppet Movie

Jolson sang, Barrymore spoke, Garbo laughed, and now Kermit the Frog rides a bicycle... If you can figure out how they were able to show Kermit pedaling across the screen, then you are less a romantic than I am: I prefer to believe he did it himself.

The transition from the yank-'em-off-if-they-bomb lunacy of the TV show to the coherent narration of the film is not a complete success.

Jim Henson, Muppet originator, and Frank Oz, creative consultant, have abandoned the successful format of their vidshow, and inserted their creations into a well-crafted combo of musical comedy and fantasy adventure.

Slapstick chases and weak movie references look tired, while the attitude towards Miss Piggy and Camilla the Chicken is, well, less than progressive.

There's always room in movies for unbridled amiability when it's governed by intelligence and wit.

The Muppet Movie packs all the thrills, laughs and excitement of a... well, two-ring circus.

There's all of these cameos that are so fun.

With charm for the kids and in-jokes for their parents (when Kermit's bicycle gets mangled, he quips, "I thought I was gone with the Schwinn"), Muppet creator Jim Henson tries to give everybody a little something.

The cast are all here, along with the technical wizardry, but the dialogue staggers from one leaden gag to another and there is an unmistakeable note of desperation throughout.

As expected, Fozzie the Bear and the old geezers Statler and Waldorf receive the lion's share of the choice lines.

while The Muppet Movie is certainly entertaining, the shift to a coherent, linear, feature-length narrative deprives the film the show's brilliantly structured inanity

Audience Reviews for The Muppet Movie

"Ever since the recent Muppet movie came out my 8 yr old nephew has been obsessed with them. So when he saw this streaming on Netflix, he begged me to watch it with him. I had never seen it before, but I really enjoyed it. I think I enjoyed watching my nephew watch it more then the actual movie. He gets very excited and jumps and screams at the t.v. and laughs very loud. OK so to put short, he's loud. I either get amused looks or dirty looks from fellow movie goer's when we go to the theater. Back to he movie. I loved that it was a road-trip. I have made it known that I love a good road-trip flick. I adore Kermit. I think he's a great character for kids. It was funny. I laughed out loud a few times. I guess the only thing that really got on my nerves was all the singing. It is a known fact that with these movies there will be singing. I don't think it would have bothered me if the songs didn't last for almost ten minutes. My nephew said he could have done without them too, so I'm not alone in thinking it. But overall it was a fun movie that kids and adults can both watch and have a fun time with."

The Muppet Movie is a film that really touched my funny bone and my heart seeing as I am a huge Muppet fan. The plot shows how they got together and it really worked for me and was fun ride, other than the boring parts with the evil frog legs tycoon. The cast was funny and did good, escpially the Muppet cast, they are always likeable. The comedy was just as perfect as comedy gets, it was seriously a hilarious ride and I loved it. The movie is for true fans of puppets, and if you are you are sure to love the best of them all, the Muppets.

Waka waka waka! Let the good times roll! Before I die of impatience for the new Muppet movie to arrive to Sweden, I thought I'd go back to the humble beginnings of these wonderfully timeless entertainers. More specifically, 1979. Bubbling with life and great musical numbers, this tells the backstory of how all the muppets came to befriend each other. Featuring cameo performances from some of the biggest stars of the 70's (Steve Martin, Richard Pryor, Mel Brooks and countless others), it has a lot to boast about in the "human half" of the cast. Some of the special effects are actually pretty flabbergasting. Like how they made Kermit ride a bike in full visible view. I'm genuinely at a loss for how they did that, even if I have a fair idea. Either way, it's a good example of the dying art that the muppets have come to represent. You don't need a bunch of computer effects to make great entertainment. All you need is a little imagination and a team of passionate, hard-working people to help you realize your dream. Jim Henson made a stroke of genius when he created this colorful gang of fun-loving characters. And the fact they're still around, more than 30 years later, goes to show how timeless they truly are. So whether you're an old fan or new, I can highly recommend a visit to this first and original muppet movie. Many of its human stars may have faded out of relevance, but it's not really for them that we watch this film in the first place. It's for the green little frog and his wackadoodle friends.