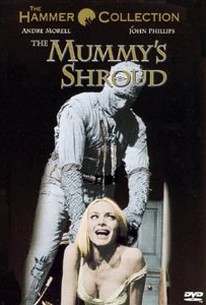 A murderous mummy is on the loose and it's got the Hammer Films stamp on it, but this tame terror flick never gets the bandages off when it comes to thrills, chills, and gore. A British archeological team consisting of Sir Basil Walden (Andre Morrell), Paul Preston (David Buck), a photographer (Tim Barrett), and psychic linguist Claire (Maggie Kimberley) discover the tomb of Kah-to-Bey, a young heir to Pharaoh who died trying to escape a rebellion. The boy was buried by a loyal slave named Prem, whose mummy stands in a Cairo museum. The expedition is joined by Preston's wealthy, press-hungry father Stanley (John Phillips), who insists they return to Cairo with the body despite warnings of a curse by the tomb's guardian. The curse soon proves to be true as the slave's mummy is reanimated by the guardian and begins murdering each of the explorers who entered the tomb. While Stanley Preston unsuccessfully tries to save his own skin, Paul and Claire find themselves in a showdown with the seemingly indestructible mummy -- until they discover that the strange writing on the boy Pharaoh's shroud may be the secret to their survival. ~ Patrick Legare, Rovi

Critic Reviews for The Mummy's Shroud

Obscure horror film, that deserves to be buried.

The human element of the film has a warped tone that makes the whole thing far more interesting than its mummy attacks would suggest.

Audience Reviews for The Mummy's Shroud

Not a bad little addition to the Hammer catalogue. Like 'The Reptile', 'Plague of the Zombies' and 'The Witches' this film doesn't feature Hammer regulars Lee and Cushing but Morell is on hand for good support (although not for long!) and once again Ripper is given a decent amount to do and puts in the best acting performance. The mummy looks hust like a guy in a thin boiler suit and some of it is laughable but Phillips is good as the cowardly villain, it's nice to see Roger Delgado (aka The Master) chewing up the scenary and the final discintigration of the mummy is well handled. Not scary compared to horror today this is still pretty enjoyable.

The Mummy's Shroud is kind of a formulaic Hammer film which like most monster movies of this kind is somewhat dull, but has a few great scenes. Those scenes are mainly in the way of a sweet monster (one of the best mummies I've ever seen) and some great killings (the mousy Mr. Longbarrow's demise was as gruesome as it was magnificent.) The Aimee Mann lookalike and the direction didn't hurt even if the acting and the story didn't exactly help. I'm not the world's biggest mummy fan so my opinion shouldn't be the most trusted here.