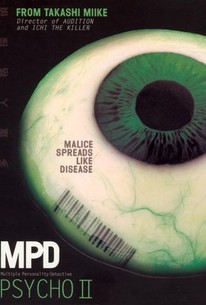 Takashi Miike directs this made-for-television adaptation of a manga by Eiji Ootsuka. The story involves a homicide detective who, after his wife is killed, becomes obsessed with his job to the point that he takes on a different identity -- one of a devoted detective. He arrests the man responsible for his wife's death, but years later, a cult begins copycatting that man's vile crimes. The detective also ends up investigating a mass suicide, and some disturbing mutilations. This release contains the third and fourth episodes of the six-episode miniseries.

Miike presents the story in all its complicated and grotesque glory, through a surrealistic approach that allows its aesthetics to bloom in full.

There are no featured reviews for Multiple Personality Detective Psycho - Kazuhiko Amamiya Returns at this time.