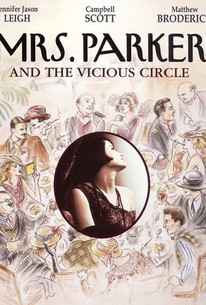 The life of acclaimed writer Dorothy Parker and her involvement with the legendary Algonquin round-table is chronicled in this bio-pic. Parker was best known for her theatrical and literary reviews, her acidic poetry, and her screenplays. Her most famous screenplay, A Star is Born, is a Hollywood classic. She is the first American female critic to be taken seriously by the New York writers. She was considered the star of the round-table. The film contrasts her personal and creative lives with her social life. The two are quite disparate as in the latter she was a gay, witty, bon vivant. In the former she was wracked with insecurity and disappointment especially in her relationships. Much of the story focuses upon her platonic friendship with humorist and critic, Robert Benchely who was always there to support her after the destruction of her two marriages, and a failed love affair with newspaperman Charles MacArthur. The formation of the round table is depicted. Parker's tragic decline into a boozy old woman is also chronicled.

Keith Carradine
as Will Rogers

Malcolm Gets
as F. Scott Fitzgerald

Rudolph films with a bittersweet blend of epigrammatic flamboyance and tautly constraining elegance, a flowing visual style that captures the fun-loving, self-destructive strivings of great creators...

A highly absorbing but naggingly patchy look at the acerbic writer Dorothy Parker and her cohorts at the legendary Algonquin Round Table.

"Mrs. Parker and the Vicious Circle" has its flaws, but it also has a heartfelt grasp of what set Dorothy Parker apart from her fellow revelers and makes her so emblematic a figure even today.

What a wonderful, detailed portrait. And what an evocation of a time and a mood. "Mrs. Parker and the Vicious Circle'' is truly one of those films that inhabits its own world.

The Dorothy Parker that Leigh and Rudolph present isn't one-dimensional. In addition to being savagely funny, she is also capable of great elegance and genuine insight.

Rudolph's effort to dramatize the life of the acerbic writer is dissatisfying due to shallow script that offers only a sketchy look, and Jennfer Jason Leigh's stiff rendition further hampered by arch accent; it's all black-and-white style and no drama.

Only Alan Rudolph could make these people dull.

A great ensemble helps to cut through a fairly stuffy narrative.

Demonstrates how even highly gifted people can bring themselves down

All of the performers are up for it, at turns witty and bright, clever and funny, tart and tragic.

A unconventional biopic featuring an even more unconventional performance by Leigh. It may not give you a great sense of specific facts or details about the members of The Algonquin Round Table, but the film does capture their moods and feelings . . . filled with wit, genius, self-loathing and bitter loneliness.

A movie a bout a life that really needs to be told, sadly this movie focuses on the torrid affairs like some grocery store rag and when Leigh speaks you really need subtitles which are cruelly not missing. Leigh stretches her voice so far her voice is monotone with little intonation to elude to her inner state.

Jennifer Jason Leigh gives a great performance as one of my favorite writers.