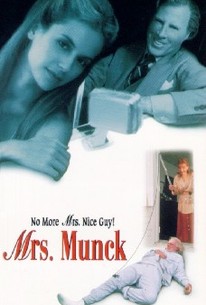 A patient widow finally exacts her revenge upon the much older man who deflowered her and impregnated her in this satirical psychodrama. Mrs. Rose Munck has just lost her husband and is now looking for a boarder. She chooses her crippled, curmudgeonly father-in-law, Patrick Leary -- the wealthiest man in the county. His family is pleased about the arrangement because Mrs. Munck is so sweet and charming. Little do they know that when she was a teen, she and Patrick, then a married man in his 40s, had been lovers and that she had borne a child that later died. For years, she has blamed Patrick for that child's death and now that he is her "guest," she has every intention of getting even. She tells others that the knives, and emotional abuse she inflicts on Leary are designed to help "heal" the crippled man and to coerce him out of his wheelchair. Meanwhile, the story occasionally flashes back to their younger days where she is seen as an innocent with a school-girl crush on the nasty older man. The flashbacks also reveal how the baby died.

Darryl Palmer
as Man in Restaurant

Mickie Moore
as Woman in Restaurant

Chris Leavens
as Steve
View All

There are no critic reviews yet for Mrs. Munck. Keep checking Rotten Tomatoes for updates!

There are no featured audience reviews yet. Click the link below to see what others say about Mrs. Munck!