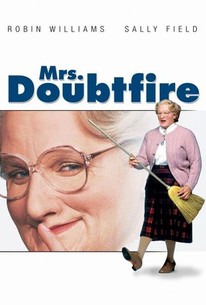 Critics Consensus: On paper, Mrs. Doubtfire might seem excessively broad or sentimental, but Robin Williams shines so brightly in the title role that the end result is difficult to resist.

Critics Consensus: On paper, Mrs. Doubtfire might seem excessively broad or sentimental, but Robin Williams shines so brightly in the title role that the end result is difficult to resist.

Critic Consensus: On paper, Mrs. Doubtfire might seem excessively broad or sentimental, but Robin Williams shines so brightly in the title role that the end result is difficult to resist.

After out-of-work actor Daniel Hilliard (Robin Williams) loses custody of his three children to his ex-wife Miranda (Sally Field), he dresses up in drag to become the matronly Mrs. Doubtfire, the family's new nanny, in order to see his kids every day.

This comedy's warm and soothing nature will give mainstream audiences in these dysfunctional-family times a perfect holiday uplift.

Although overly sappy in places and probably 20 minutes too long, this Robin Williams-in-drag vehicle provides the comic a slick surface for doing his shtick, within a story possessing broad family appeal.

I've rarely laughed so much at a movie I generally disliked.

Sit-com stuff, then, with laboured farcical interludes, and a mushy post-feminist sensibility. Funny notwithstanding.

The dress, the mask and Mrs. Doubtfire's gentility are inherently limiting, but nothing holds Mr. Williams back when he's on a roll.

The film is not as amusing as the premise, and there were long stretches when I'd had quite enough of Mrs. Doubtfire.

Anybody tempted by nostalgia should stay away to preserve the illusion that this was once so well-liked.

The greater story is sacrificed for schticky gags about a guy dressing as an old woman.

Modern comedy classic w/Robin Williams in and out of drag.

Only The late Robin Williams has ever been able to pull off being a woman! An overrated movie but it holds genuine emotion and comedy to be family gold!

No doubt about it - Robin Williams is brilliant!

An eccentric actor specializing in voice over work takes drastic measures to be with his kids after a bitter divorce from his nagging shrew of a wife gains sole custody of their three children. His solution: get his makeup artist brother (and the brother's partner) to make an impressive set of clothes and prosthetics to become Mrs. Doubtfire-the new Scottish nanny hired by his ex-wife to take care of the kids and the house while she focuses on her career. It's a high concept film that really works. It was great in the 90s, and it still holds up quite well over 20 years later. Chris Columbus is a rather hit and miss director at times, but this is easily one of his best. It's funny, memorable, highly quotable, and really does a good job at dealing with tough topics. Divorce is hard on kids and their parents, and the film shows this, but does so in a way where the comedy and drama are mixed pretty evenly. Robin Williams puts his talents to very effective use, and it seems to me as if this role was tailor made for him. He gets to run wild with his shtick, yes, but he also shows his true acting chops when needed as well, and, though he is immature, he changes, and it is earned. Sally Field, good actress though she is, is rather one note here as the nagging wife. She gives the role a bit more weight due to her skill, but sadly it's still not the most developed or fleshed out role. The three kids (including Mara Wilson in her film debut) are fine enough, though the older daughter can be a really unlikable bitch at times. Also, it cracks me up how the boy kinda looks like Dave Grohl to an extent. Other people who show up are Pierce Brosnan as a well-to-do snob trying to take over Williams's role as family man, Robert Prosky as Williams's boss at his court-appointed job, and Harvey Fierstein as the makeup artist brother. The film does run long, and, as I said, some of the characters are not all that likeable or developed, but overall, this is a well meaning, enjoyable, and pretty memorable blast.