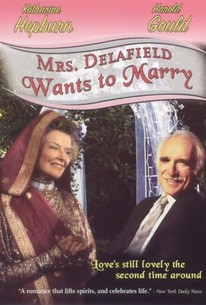 Mrs. Delafield Wants to Marry was especially written by playwright James Prideaux for Katharine Hepburn. It would have been impractical to attempt a live staging, so the script was committed to a TV movie, under the direction of Hallmark Hall of Fame veteran George Schafer. Hepburn plays another variation on the indomitable elderly lady that has become her forte in the past decade. Here she is Margaret Delafield, a wealthy WASP widow who falls in love with the divorced Jewish doctor (Harold J. Stone) who has saved her life. The clucking tongues of both her family and the doctor's will not dissuade her: Mrs. Delafield stands her ground in a climactic scene reminiscent of the actress' earlier Guess Who's Coming to Dinner (67). Mrs. Delafield Wants to Marry is formula all down the line, but every latter-day Katharine Hepburn performance deserves to be treasured (though the film itself hardly warranted the three-page TV Guide article written by Ms. Hepburn herself).

Wally Marsh
as Man in Men's Club
View All

There are no critic reviews yet for Mrs. Delafield Wants to Marry. Keep checking Rotten Tomatoes for updates!

cute but just a simple tv movie even with the talent involved, nothing special.