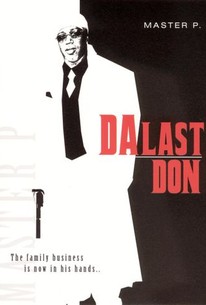 Rap music star and No Limit Records impresario Master P sparked a small revolution in hip-hop filmmaking with his independent, straight-to-video hit I'm Bout It. He returns to the screen in this crime drama as Nino Corleone, the son of a mob boss who is forced into a life of crime when he must avenge the death of his father at the hands of the Cuban mob. Master P co-wrote and co-directed the film in addition to playing the lead and performing much of the music. Da Last Don also features appearances by several other No Limit artists, including Silkk the Shocker, C-Murder, Mia X, and a special appearance by Snoop Dogg.

There are no critic reviews yet for MP Da Last Don. Keep checking Rotten Tomatoes for updates!

There are no featured reviews for MP Da Last Don at this time.