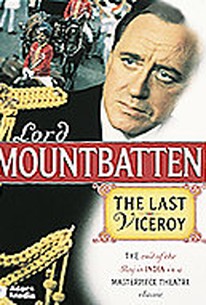 Lord Mountbatten: The Last Viceroy was a 6-part British miniseries, first telecast in the US on PBS' Masterpiece Theatre. The series covers the years 1946 through 1947, during which time the British government granted independence to India. War hero Lord Mountbatten (Nicol Williamson), although considered a political lightweight, is appointed the task of overseeing the transition of power. It is the sort of test that separates the Lords from the boys: Mountbatten must not only unite the squabbling factions within India, but also counteract the rhetoric of Winston Churchill (Malcolm Terris), who is dead set against losing the Empire's "jewel of the crown." Once independence is officially granted, Mountbatten is challenged with open combat between the Hindus, Muslims and Sikhs, as well as territorial demands from Pakistan and the Kashmir. Also appearing in this epic production is Sam Dastor as Gandhi, Ian Richardson as Nehru, and Vladek Sheybal as Jinnah. Lord Mountbatten: The Last Viceroy was first seen on Masterpiece Theatre from January 26 through March 2, 1986. ~ Hal Erickson, Rovi

Vladek Sheybal
as Jinnah
View All

There are no critic reviews yet for Mountbatten: The Last Viceroy. Keep checking Rotten Tomatoes for updates!

There are no featured reviews for Mountbatten: The Last Viceroy at this time.