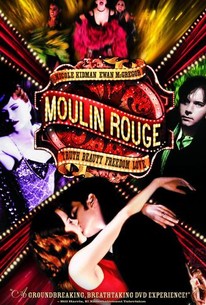 Critics Consensus: A love-it-or-hate-it experience, Moulin Rouge is all style, all giddy, over-the-top spectacle. But it's also daring in its vision and wildly original.

Critics Consensus: A love-it-or-hate-it experience, Moulin Rouge is all style, all giddy, over-the-top spectacle. But it's also daring in its vision and wildly original.

Critic Consensus: A love-it-or-hate-it experience, Moulin Rouge is all style, all giddy, over-the-top spectacle. But it's also daring in its vision and wildly original.

The third film from pop-music-obsessed director Baz Luhrmann tweaks the conventions of the musical genre by mixing a period romance with anachronistic dialogue and songs in the style of his previous Romeo+Juliet (1996). Ewan McGregor stars as Christian, who leaves behind his bourgeois father during the French belle époque of the late 1890s to seek his fortunes in the bohemian underworld of Montmartre, Paris. Christian meets the absinthe- and alcohol-addicted artist Henri de Toulouse-Lautrec (John Leguizamo), who introduces him to a world of sex, drugs, music, theater, and the scandalous dance known as the cancan, all at the Moulin Rouge, a decadent dance hall, brothel, and theater that's the brainchild of Harold Zidler (Jim Broadbent). Christian also meets and falls into a tragically doomed romance with the courtesan Satine (Nicole Kidman), who becomes the star of the play he's writing, which parallels the couple's romance and utilizes rock music from a century later, including songs by Nirvana, Madonna, the Beatles, and Queen, among others. Loosely based on the opera Orpheus in the Underworld, Moulin Rouge was shown in competition at the 2001 Cannes Film Festival. ~ Karl Williams, Rovi

Garry McDonald
as The Doctor

Jacek Koman
as The Unconscious Argentinian

Arthur Dignam
as The Father

Jonathan Hardy
as Man in the Moon

Moulin Rouge seems to defy esthetic gravity: by reveling in all things artificial, it arrives, giddily, at the genuine.

It's still a one-of-a-kind, we'll give it that. But its sense of fun is so relentless and excessive, it all ends up being extremely tedious and shallow.

Moulin Rouge is a tour de force of artifice, a dazzling pastiche of musical and visual elements at the service of a blatantly artificial story.

Mr. Luhrmann and his colleagues have worked like whirling dervishes to make the plot look like it's moving.

If it lacks the emotional punch of Luhrmann's earlier films, and drags towards the end, it is still great fun.

[Luhrmann] gives you way too much of what you didn't really want in the first place: soulless high jinks.

In short, Kidman and McGregor shine like diamonds in the sky, proving once again that at least in movies, there is no greater thing than to love and be loved in return - or to have big box office in Hollywood.

Moulin Rouge is a seductive and original film, a turbocharged tribute to romanticism.

As is... its still an extremely good movie with visuals and songs performed in a way that certainly make it worth seeing in the cinema.

Moulin Rouge will not be surpassed this year for an enticing, innovative and joyous film-going experience.

Moulin Rouge is far from perfect, but as usual, Baz Luhrman has managed to create something new... a real rarity in today's recycled Hollywood.

If its goal was to reveal the emptiness of postmodern bricolage at the blockbuster level, it has succeeded. By any other standard, it's a mess.

A.S. Hamrah
In These Times
View All Critic Reviews (199)

THE GREATEST THING YOU'LL EVER LEARN IS JUST TO LOVE AND BE LOVED IN RETURN!

Christian: The greatest thing you'll ever learn is just to love and be loved in return.  "This Story Is About Freedom" Moulin Rouge is a film that I appreciate more than I like. I enjoyed it to an extent, but this really isn't my type of film. I will say it is a lot better than Luhrman's Romeo+ Juliet. This is a hyper visual musical feast for the eyes and ears. There's a lot going on in the background, with amazing sets and stunning visuals. If I was basing this movie purely on art direction, it would be perfect. It's one of the most visually fantastic movies I have ever seen. The film never goes wrong really, I'm just not that huge of a fan of musicals. If you love musicals, this is an absolute must watch.  At the heart of the film is a love story between a young writer and a courtesan. I love the two performers in the leaden Nicole Kidman and Ewan McGregor. Both are great running around at hyper pace, dancing, and singing. But there's a lot more here than your traditional love story. There's like twelve layers of story going on at any given time. There's so much going on during the film visually, lyrically, symbolically, and structurally that it demands your full attention, and never becomes boring. It's always entertaining and a lot of the time groundbreaking. Moulin Rouge deserves the praise it has gotten. It may be weird, it may be a bit of a mess; but it is also just one hell of a film experience. It's original in the way it tells its story, and there's really nothing I can say about it that is negative. It's worth a look for sure.