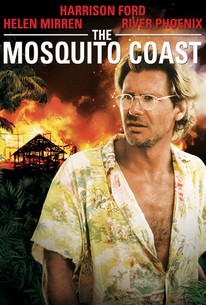 Even a stellar performance by Harrison Ford as Allie Fox, an increasingly unbalanced inventor and crusader cannot make up for the downward slide at the end of this drama or for the need to probe a little further into the characters of Fox's son Charlie (River Phoenix) and his wife (Helen Mirren). After Fox's invention of an ice-making machine that runs without electricity is snubbed by the commercial world, he takes action on his disenchantment with materialistic, consumer-oriented American culture, sells his home, and moves to a fictional Caribbean island with his family. There he exhorts everyone to live off what nature provides and starts to set up his concept of an ideal environment. In the meantime, a pesky preacher on the island, capricious Mother Nature, and his family's growing discontent with his increasing obsessions are the first signs that this idyll is anything but.

Emory King
as Man at Bar

Abel Woolrich
as Mercenary
View All

News & Interviews for The Mosquito Coast

View All The Mosquito Coast News

Critic Reviews for The Mosquito Coast

long with a clever and complex performance by Harrison Ford, that ambition makes for a movie that is deeply flawed, but undeniably powerful.

The movie has been directed and acted so well, in fact, that almost all my questions have to do with the script: Why was the hero made so uncompromisingly hateful?

A stretch for Ford, but worth it. Unique and fascinating character study.

Examines the consequences of a father's egotism on his family.

Meandering film that doesn't really seem to know where it's going or what it is.

It's a testament to Ford's talent that we actually care what happens to him, because in a lesser actor's hands, we'd be hoping that some cannibalistic natives would eat him.

It's easy to forget how well Harrison Ford can play an unlikable character.

Harrison Ford gives one of his best performances in this underrated film.

one of the most underseen guy movies ever

Audience Reviews for The Mosquito Coast

Definitely not for all tastes. This challenging film boasts a full committed performance from Harrison Ford, possibly his best work, with strong support by Helen Mirren and River Phoenix. Weir guides us through a complex portrait of a deeply flawed perhaps insane man's quest for what he sees as a simple life but which twists him into a demagogue imperiling his family on his fruitless journey. Tough going but a good picture.

Harrison Ford has made one movie that lost money, this one. Which is a damn shame as it's one of his most interesting. "...(He's) the most dangerous kind of man, a know it all, who is occasionally right." Ford drags his family to South American to bring the ice (and therefore civilization). Chaos ensues. Weir's direction is concise and tight, performances all round are fantastic. It's a shame that the failure of this drove him to the milk toast that is Dead Poets Society. An awesome double feature with There Will Be Blood or Fitzcaraldo.

A gripping, uncompromising look at a family who follows their father (Harrison Ford) blindly into Central America, due to the father's utter disgust on how corrupted America has become - so he elects to try his luck out in the jungles where he puts his skills on display. This is a solid film, which is worth watching due to Harrison Ford's roaring, knockout performance as a man unaware of his own hypocrisy, and uncaring towards his family's feelings. Helen Mirren and River Phoenix also give very subtle, but still strong performances. Although this film has its flaws (such as the over-zealous extreme Christian missionary who chews up only five minutes of the film - five pretty bad and exaggerated minutes), the strengths of the film and the way the plot unfolds naturally (never once feeling artificial) is a thing of beauty to watch. Definitely a film I will want to revisit in a few years again.

A semi-remake of the Swiss Family Robinson, mixed with the story of a self-righteous scientist going crazy. This has an important story and lesson about independence and isolation, for that it's very effective. I really enjoyed all the performances, River Phoenix and Helen Mirren stand out along with Harrison Ford in one of his only villainous roles (but it's sure effective).