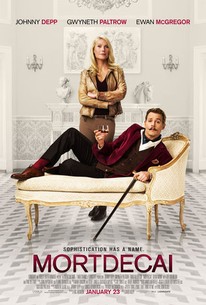 Juggling some angry Russians, the British Mi5, his impossibly leggy wife and an international terrorist, debonair art dealer and part time rogue Charlie Mortdecai (Johnny Depp) must traverse the globe armed only with his good looks and special charm in a race to recover a stolen painting rumored to contain the code to a lost bank account filled with Nazi gold. (c) Lionsgate

Michael Byrne
as The Duke

Colette O'Neil
as The Duchess

Evie Brodie
as Mum on Plane

Jonny Pasvolsky
as Emil
View All

With art-heist caper Mortdecai, Johnny Depp tries his darnedest to start a kooky Austin Powers-like franchise with a side of bumbling Insp. Clouseau. But dash it all if it isn't a crashing bore, old bean.

Mortdecai isn't particularly funny, but it's also not the Pistachio Disguisey 2015 train wreck the Internet has spent the last few months anticipating. It's brainless, but it's painless.

Go if you're a raging Anglophile with an afternoon to burn or you just love Depp, even at his hammiest. Otherwise, don't point this thing at you.

The humour is puerile and idiotic, but you may laugh out loud in spite of yourself -- especially if you're familiar with the Carry On movies or the original Pink Panther.

Daffy, dated, and precisely as intended.

Mortdecai is a scattershot comedy caper film ... destined to fall into that rotation of films you always see on cable networks and wonder if anyone is actually watching them.

It was misguided at every junction.

It was a low-rent Wes Anderson movie.

As I said earlier, it isn't good enough or bad enough to even get a real reaction.

Mortdecai is an okay film that will struggle to find a U.S. audience. A character is given a silly mustache to set the tone right away, and the tone in entirety is just that- silly.

Depp's exaggerated mannerisms and affected speech are sure to infuriate his detractors and please those who enjoy his long line of goofy character creations.

It's not going to be called conventionally appealing, or successfully funny, but Mortdecai is not exactly the colossal unwatchable bomb that critics brought out their knives for in the first month of 2015. It's a curiosity that has some merit in its failure but it's hard to lambaste this lark too much because it never takes itself too seriously. Johnny Depp plays Mortdecai, a roguish art dealer who also traffics in stolen paintings. Gwyneth Paltrow is his co-conspirator and wife. Paul Bettany is Mortdecai's long-suffering manservant always getting into dustups or occasionally shot by his master. The weird left turns the comedy keeps taking don't exactly make the movie better but they save it from being completely unmemorable. Your enjoyment factor will weigh heavily upon your tolerance for Depp in full foppish mode, an effete dandy who struggles with his conflating love of his mustache and his wife's distaste for it. The entire story is a shaggy dog caper about stolen art that involves the Russian mafia, MI 5, and Nazi gold, and nothing matters. The actors look to be having a good deal of fun, playing dress up and trying on silly accents. I can't say I laughed out loud but I did occasionally smile at the absurd commitment. I mostly sat wondering how something like this gets made, and then I saw that Depp was one of the producers and that answered that question. Mortdecai may not be worth the invective but that doesn't mean it's good. Nate's Grade: C-

Imagine Blake Edwards Pink Panther series updated and starring the oh-so-cool Diana Rigg as a sleuth par excellance and Terry Thomas as her bumbling wannabe a detective husband and you've pretty well got the Mordecai flavor in a nutshell. But to know what I'm talking about one might well have to have been a child of the Sixties and grown up enjoying that brand of slapstick humor. Lacking that upbringing this all might seem a little strange, but having that (and I assure you, I do have it) one might enjoy the lot as sort of time-passing kitschy fun. I certainly did.

Far be it from me to jump hastily on the negativity bandwagon like some ravenous nitpicking whiny movie critic, but by Jove this movie is shit. Yet another adaptation of a novel I've never heard of but the general premise is very familiar. Whether or not this film is close to the original source material I don't really know, but what Koepp offers here is Quintessentially a very British affair that has clearly been lifted from various sources. British characters from the mid 60's era (the 'Carry On' franchise), possibly a dabble of 'The Pink Panther' franchise (American movie based around stereotypical continentals), maybe a hint of Basil Fawlty and the 'Fawlty Towers' franchise (in this movie at least, the books turned up before that TV series) and of course the one and only British gent Terry-Thomas. Well lets not beat around the bush here the author of these original stories has presumably based his main character on Terry-Thomas. The first lines of dialog spoken by Depp in this movie immediately made think this was the official Terry-Thomas movie...action movie. You can quite clearly tell Depp is doing his best pompous aristocratic British accent which just happens to kinda sound like an attempt at Terry-Thomas. Of course he also looks like a typically well groomed, old fashioned dapper, debonair gentlemanly toff with his posh suits, slick back hair and walking cane. The odd thing is a lot of the plot and consequent jokes revolve around his facial hair, its like a character. The strange thing is I'm not overly sure what the point of his tash was, it seems to somehow be important to his character but never really adds anything to his character or the plot. All we know is his wife played by Paltrow hates it and makes her gag, which in turn makes Depp's Mortdecai gag also. This is one of the main visual jokes in the movie, its repeated often and is played up as though it were a stroke of comedic genius...which it most certainly isn't. The whole truth of the matter is Johnny Depp spends the entire movie prancing about trying his best with a John Cleese impression with physical comedy whilst at the same time trying his best to be funny with childish facial expressions. His one key weapon is a nasal/back of the throat grunt which he often lets out in frustration, that with plenty of tash stroking, raised eyebrows and in general some of the most wussy, namby pamby, wishy-washy slapstick ever. There's nothing wrong with a good bit of slapstick of course, it can be very clever and very difficult to pull off. This on the other hand is the most childish crapola ever! there is literately nothing going on in this movie other than infantile nonsense of the highest order. Its not funny nonsense either, its painfully bad, awkwardly unfunny and genuinely makes the cast look ridiculous, I felt embarrassed watching them at times, I actually felt bad for the cast. Other than terrible physical comedy the action is completely nondescript, its utterly garbage and not even remotely exciting or thrilling. Never at any point do you feel a rush of adrenaline fearing for any characters life or getting sweaty palms over a solid stunt. The car chases are clearly slow, the fights are clearly fake, the bad guys are laughable, the stunts are average at best and what's more...the whole thing is so so boring!! Its all basically about stealing a valuable painting or trying to recover it from thieves...whatever. I totally zoned out for the most of it because it simply wasn't interesting in the slightest. You are literately watching Depp mincing around trying his best to make us believe he was the right casting choice (we all know he wants to be European more than anything so he's lapping it up). Paltrow does nothing, McGregor does nothing and Bettany plays some cliched cockney tough guy who every now and then loses his cockney accent. Bettany's character babysits Depp's character so whilst Depp runs around like a fairy Bettany is beating bad guys up in a U rating kind of way. Some of the locations are lavish and lovely looking, the movie on the whole is very glossy and slick, costumes are obviously highly expensive and tailor made and of course the cars are super duper. Its clearly trying to be a cross between 'The Pink Panther' with a dash of James Bond and maybe 'The Avengers' (60's version). The lead character as said is clearly a Terry-Thomas type chap who has bumbling inept Inspector Clouseau tendencies. Every now and then they might chuck out the odd swear word or adult sexual double entendre to try and spice things up a bit for the grown ups but then straight away the movie loses its target audience, which I'm guessing is youngsters? The whole thing is absolutely dreadful from start to finish, there wasn't really any highlight I could think of. Its like you go back in time watching this, it feels like an early 90's movie. Honesty had this come out in the 90's I reckon it would have done OK, the entire movie is so dated, so out of touch with modern cinema even for a bad movie. What's worse and very evident is this was a factory line Hollywood cookie cutter product which was intended to kick start a franchise. Everything about it screams franchise bait, its sickening to watch. This is also proof that Mr Depp is in fact quite a limited actor who has actually been surviving off his quirky, eccentric performances for too long. His shtick has been well and truly milked and exhausted. Change your game Depp, you can't keep rolling out that one performance anymore.

David Koepp's Mortdecai isn't a smooth traverse around the continents; yet somehow manages to stay the course. Sporting nearly 110 minutes of mustache, and riddled with sexual innuendos, Mortdecai holds interests with its missing art painting plot. At the same time however, the problem with the story is that it moves quite hastily and coupled with the variety of characters and over the top moments, it becomes quite hard to grasp. The laughs aren't as many as this picture warrants, unless sexuality is the seed to laughter. The violence is mild and there are only a couple F bombs, which apparently is enough for the R-rating. It's hard to argue with Johnny Depp. His reactionary expressions and line delivery fit well into this outrageous art dealer of a character. Ewan McGregor, Gwyneth Paltrow, and Paul Bettany provide excellent supporting characters around Depp. Mortdecai has its share of flaws, but this picture gets a passing grade with its comedic style.