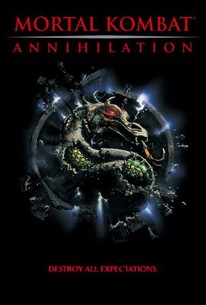 Just when you thought the game was over, along comes the second movie inspired by the popular video game Mortal Kombat. While Liu Kang (Robin Shou) led his warriors Princess Kitana (Talisa Soto), Sonya Blade (Sandra Hess), Rayden (James Remar), and Johnny Cage (Chris Conrad) to victory, and the safety of the world seemed certain, no one counted on the treachery of Shao-Kahn (Brian Thompson), the evil Emperor of the Outerworld, who has a new plan to overtake the Earth. Shao-Kahn has discovered a portal between Earth and Outerworld, and if it stays open for seven days, the two worlds will merge, with Shao-Kahn controlling both planets. Rayden and Sonya set out to find his colleague Jax (Lynn Red Williams), while Liu Kang and Kitana are on the trail of Nightwolf (Litefoot) as they race against time to defeat Shao-Kahn, who has brought Kitana's mother Queen Sindel (Musetta Vander) back from the grave to aid his evil scheme. Mortal Kombat II: Annihilation marked the directorial debut of cinematographer John R. Leonetti. ~ Mark Deming, Rovi

Carolyn Seymour
as Elder God No. 2
View All

10 Awesome Video Games That Were Made Into Terrible Movies

Never -- at least not since the first Mortal Kombat -- has tedium been so loud, so full of backward flips and flying fists to the kissers of centaurs from another realm.

The first sequel to 1995's highly successful Mortal Kombat, Mortal Kombat Annihilation adds little to the development of the saga except for a truckload of martial arts sequences and a whole mess of bigger and louder special effects.

It wastes no time getting to the punching, kicking, stomping and zapping that passes for a cinematic event.

The video game is much more fun, of course.

Fragmented and monotonous, without a semblance of the gymnastic cleverness that at least made the first Mortal Kombat film into watchable trash, Mortal Kombat Annihilation is as debased as movies come.

The most stimulating, satisfying aspect of this action fantasy is the theme music.

Mortal Kombat was the perfect level of cheesy badness, this is just... badness. It exceeded my bad memories of it, and lived up to its reputation, that's for sure!

Mortal Kombat: Annihilation is a joke.

This film is only made for fans of the game. [Full Review in Spanish]

It is inscrutable mostly and in those rare moments that it can be decoded, it's so awful as to prove unworthy of the effort.

It's hard to believe that it was produced by big studios in Hollywood, since it's one of the worst films ever made. [Full review in Spanish]

Clearly a catastrophe as a sequel and overall film. Mortal Kombat: Annihilation is forgettable, inconsistent and filled with mediocrity that's insulting to the famed-fighting-game that it's inspired by. 2/5

'Flawless victory'...well not quite, in fact neither word should enter this review again. Follow up to the reasonable effort that didn't do too badly upon release and managed to thrash JCVD and 'Street Fighter'. This isn't too far from the first film really in terms of layout and fights, nothing too spectacular and not well acted, more pantomime than cinema. But like the original there are little rays of sunshine here and there, the odd little glimmer of decent action or a nice set. Lets not get carried away here though its so unbelievably cheesy and hammy yet all the cast seem to take it seriously, worryingly so James Remar who clearly needed the work. We do see more characters in this outing which was quite nice, a much wider range and some of whom didn't look that bad but again like the first film its hampered by outrageously bad CGI effects all over the show along with some nasty looking bluescreen work. Its still a complete childish mess which really does bring shame to the franchise lets be honest. The odd moment of sunshine doesn't outweigh the massive amount of crap on show. The costumes look the worst really, so pathetic, as if someones mum made them in her spare time or the kinda stuff you might wear to a fancy dress party. Due to this being an epic failure the third planned film, 'Mortal Kombat: Devastation', was shelved, not too surprising. Also interestingly...Sly Stallone turned down the role of 'Baraka', Lambert would of come back for this sequel but was committed to another film, Michael Jai White was gonna be 'Jax' but got 'Spawn' instead and Tony Jaa and Ray Park both were stunt men in this film.

I feel like I stepped into a really bad Power Rangers episode made by 2 6 year olds. This movie has little to no redeeming qualities, and one a bad scale, is right up there with Eragon (And Eragon was HORRIBLE) Let's talk about the special affects. See line #1 of my review. They were downright awful. I could make better affects with my Windows Movie Maker. And a few puppets. And some string. I guess the creators of this movie need to thank God for photoshop. The villains were REALLY lame too (Again, see line #1 of my review) They looked like reject Power Rangers villains made in a kindergartner's fan fiction. Not only were these "bad" guys laughable, but there lines were really stupid. As was the acting. That's 3 Power Ranger's 6 year old references in one review. I think I've set a record! So yeah, the acting was pretty horrible. As for the plot...What plot? The movie is pretty much good vs evil and...Yeah that's pretty much it. My God, we've hit 4 people! 4!!!! This movie challenges everything you know about who makes movies. This movie could have been written by a monkey. It could have been acted out by the people in a Kindergarten play playing the trees, and the special affects could have been down by my 4 year old cousin. But I mean we do have to give this movie credit for something...The pink ninja is REALLY, REALLY hot.

Awesome fight scenes with MK characters. Acting and effects were probably terrible but when I was 11, this owned everything.