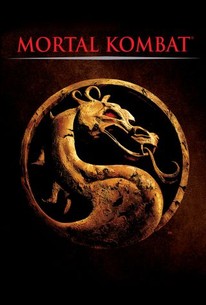 Three reluctant fighters are drafted for an intergalactic martial-arts tournament that will determine the fate of the human race in this special-effects-driven adventure. Inspired by the popular and notoriously bloody video game, Mortal Kombat provides a semblance of a plot as an excuse for rampant mayhem, with the evil alien forces challenging humanity to a kung fu battle to decide the Earth's fate. Following the failure of several previous human defenders, mankind's last chance lies with egotistical action film star Johnny Cage (Linden Ashby), tough but beautiful special agent Sonya Blade (Bridgette Wilson), and vengeance-minded hero Liu Kang (Robin Shou). Under the guidance of inspirational sorcerer Lord Rayden (Christopher Lambert), this unlikely trio faces off against a series of terrifying alien adversaries. As in the video game, the martial arts battles are the true point, with standard fighting combining with magical touches supplied by computer-generated effects. The dramatic content often resembles a Saturday morning cartoon, but Jonathan Scott Carlson's appropriately dank production design and the visually spectacular battle sequences made the film a hit amongst younger fantasy-action fans, spawning a sequel and a TV show. ~ Judd Blaise, Rovi

Keith Cooke
as Reptile
View All

A martial arts action-adventure with wondrous special effects and witty production design, it effectively combines supernatural terror, a mythical slay-the-dragon, save-the-princess odyssey and even a spiritual quest for self-knowledge.

The guys in the recording studio who made the ooofff! augghhhh! sounds are the ones who really had all the fun.

Where others have sunk in the mire of imitation, director Paul Anderson and writer Kevin Droney effect a viable balance between exquisitely choreographed action and ironic visual and verbal counterpoint.

British director Anderson does a fair job with what he was given: four good-looking leads, some very impressive sfx, Babylonian sets, a bone-crunching soundtrack, and a battery of well-choreographed fights.

The most intriguing is a glassy-eyed follower whose right hand shoots out a hissing reptile that can extend itself for miles. Exotic creatures like these make watching Mortal Kombat feel like being in a high-tech fun house.

The movie has everything a teenage boy could want... Everything, that is, but an interesting plot, decent dialogue and compelling acting.

Bad actors in lead roles, sometimes poor fight choreography and extremely dated special effects, MK isn't a good film, but it does make for a good laugh with friends!

One of its main attractions is, in effect, the way in which it works with the visual and interactive aspects of the videogame, trying to incorporate all this into a totally different product. [Full Review in Spanish]

It's a movie rife with mullets, gratuitous gymnastics, screamed lines, and terrible CGI. But it all just contributes to the charm.

The first and best of the 'MK' movies. I saw this on cinematic release and thought it was slightly OK, upon watching it again I still feel its slightly OK, extremely hokey and tacky but it holds its own to a degree. At the time it was either this or 'Street Fighter' with JCVD and MK won hands down. Its basically a continuous setup for various fights between popular characters, unfortunately the fights are very basic and don't even look too good but they were fine for the time and the characters do look good, Scorpion being the best. The look is dark n gloomy in a PG kinda way, kinda goth with some glorious location backdrops and it does match well against the game. It is very gentle stuff but it does the job well, which is rare for a computer game film, it just about gives you what you expected...after seeing the trailer and realising it wasn't an adult film that is. Tagawa and Lambert make the film stand out with some nice hammy ass performances but they do inject some laughs and a reasonable hint of realism or a sense of danger into the fun. They both give the film much needed bite with the lack of spine removals and acid pools. Rest of the cast are pretty much your bargain basement D-list personnel which may have been hired off the street I dunno. I guess you have Robin Shou who looks the part and can actually do the moves. The film is a lost chance for something really nasty lets be honest but we all knew this would happen right, at least it betters the 'Double Dragon' film. One also has to remember this is in the days of early CGI and by gum its bad here!. Not only do they use a lot of it (naturally) but it looks awful, really basic stuff that doesn't even look like its been done correctly. What on earth they did to 'Reptile' I'll never know, looked like something off an old Amiga videogame. Best to forget about the 'Goro' puppet creation, not bad though...in a PG 'TMNT' kinda way that is, good dated 90's techno soundtrack too. Its all 90's...'FIGHT!!'

I've played 4 MK games, MKII, MKIII, MK Deadly Alliance, and MKI, and though I don't think the games are incredibly good like everyone else says, I will say, it was good for a movie idea. Aaaaaannnnddddd...... The movie was just okay. The acting is cheesily entertaining, and some of the action scenes are good. The only nitpicks I have for the film is that, while some of the effects look really good like Goro, Scorpions eyes and skull face, and the soul stealing thing that Shang Tsung does, most of the other effects look really bad or look really dated, like Reptiles CG form, the spear that comes out of Scorpions hand, or the electricity effects on Raiden. Another Nitpick is that a lot of the action scenes go on a little too long, like 5 minutes too long. Most fighting movies have fights up to about 4 to 5 minutes, most of the fights in this movie, go on for about 9 minutes to 11, and it gets really boring after a while. But its a decent movie overall and its entertaining to watch with friends, even if it is just to make fun of it.

I just get the feeling that this movie was completely rushed. It seemed cool as a little kid, but looking back now it just seems all too cheesy.

Rewatching this recently brought back a lot of memories. The film based on the popular video game of the same name looks dated by today's standards with cheap dialogue, special effects and mediocre acting. But boy is it still a fun film to watch. Mortal Kombat focuses on a tournament where the best martial arts fighters are assembled on a secret island to battle in hand to hand combat in order to win and determine the fate of the human race. Paul W.S Anderson first video game to film adaptation (he would later helm the Resident Evil films) is a good acting yarn, that is meant to be harmless fun. On that end, the film succeeds. Mortal Kombat can be seen as a guilty pleasure. The film has good actin, cheesy one liners and it's one of those films that you can't take too seriously. As a person who has played the game, I thought that this was a good, entertaining film that fairly respected the game. Mortal Kombat, though an average action film is a respectable video game to film adaptation. The film is non stop excitement and thought it won't win any Oscars, it does a great job at keeping the feel of the game. But it does feel like a B movie by today's standards. Mortal Kombat is a mindless action film that is a lot of fun, and it manages to keep the best elements from the game. Mortal Kombat is an entertaining guilty pleasure that though dated is a lot of fun to watch.