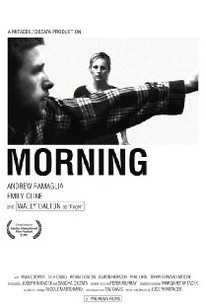 Set against the well worn back-drop of Seattle's fishing terminals and working class neighborhoods, 'Morning' centers around a young married couple who are suffering from the accidental drowning death of their child. Wrestling with his sense of guilt, Michael Hade pushes his questionable drinking into a darker, more uncontrollable state. Sara Hade's attempt at forgiveness is challenged by her husband's self- destruction and the temptation of an old boyfriend. With the help of Roger, a fishing Captain and old family friend, Michael tries to repair the marriage that he has all but destroyed.

There are no critic reviews yet for Morning. Keep checking Rotten Tomatoes for updates!

There are no featured reviews for Morning at this time.