Morirai a Mezzanotte (The Midnight Killer) (You'll Die at Midnight ) (1997) 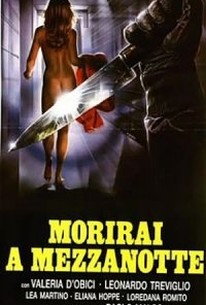 Nicola (Leonardo Treviglio), who despite his name is a male policeman, accidentally spies his wife out shopping and decides to surprise her. Only the surprise is on him, when he spots her smooching with an afternoon lover in a lingerie shop. At home he confronts her, leading to the mother of all domestics: with him being stabbed with an ice pick, and her nearly being drowned in a basin full of washing up. Bleeding, he leaves, and his wife takes a shower, only to be stabbed to death by someone wearing black gloves and brandishing the ice pick she attacked her husband with.

The police, led by Inspector Pierro Terzi (Paolo Malco), reluctantly finger Nicola as the killer of his wife. Seemingly unaware of his his wife's death, he runs into the arms of his friend, Anna (Valeria D'Obici), a criminal psychologist and lecturer at the nearby college. She persuades him to leave, and then tries to convince Inspector Terzi that Nicola cannot be the murderer. She believes a psychopath is on the loose, and that the killing has all the hallmarks of the murders committed by a serial killer called Franco Tribbo, who supposedly died in a fire at the sanatorium he was being kept in 8 years previously.

There are no critic reviews yet for Morirai a Mezzanotte (The Midnight Killer) (You'll Die at Midnight ). Keep checking Rotten Tomatoes for updates!

Average giallo tale but it's near impossible to watch as it has far too few deaths and way too much talking. And speaking of talking the film is only available in Italian with atrocious English subtitles. A few examples that stood out: "I want to ask him for a pleasure." Uh, I think the word is 'favor'? "Carol I feel panicky" "No, you may not get panic." And my personal favorite: (After two characters return from a jog) "I am out of puff." Subtitles aside it's a pretty weak effort from Lamberto Bava considering a year prior to this one he made the gory, kick-ass Demons.