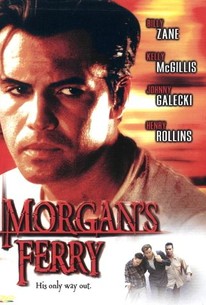 A woman whom life has passed by finds love in a very unexpected way in this drama. Sam (Billy Zane), Darcy (Johnny Galecki), and Monroe (Henry Rollins) are three convicts who have escaped from a prison camp in the deep South, and are on the run from the police. Desperate to find money and a way out of the state, they happen upon the cabin of Vonee (Kelly McGillis), a hard-bitten spinster who lives alone in the woods. The three convicts invade Vonee's home and take her hostage, but they soon discover she isn't at all intimidated by them, and wouldn't be willing to give them money even if she had any. While Monroe is an ill-mannered musclehead and Darcy has a weak will and a short fuse, Sam is far more charming and generous than his circumstances in life would suggest, and Vonee soon finds herself falling in love with him; before long, Darcy and Monroe decide it's time to move on, but Vonee doesn't want Sam to leave, and she hides him from the police on her property. Morgan's Ferry also stars Roscoe Lee Browne and Muse Watson.

There are no critic reviews yet for Morgan's Ferry. Keep checking Rotten Tomatoes for updates!

There are no featured reviews for Morgan's Ferry at this time.