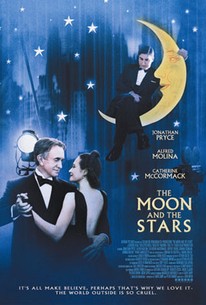 A movie set becomes a metaphor for the tragic rise of World War II in Europe in this historical drama. It's 1939, and as Benito Mussolini rules Italy and war sweeps through Europe, Italian film producer Davide Rieti (Alfred Molina) is attempting to set up his latest project, a historical epic adapted from Puccini's opera Tosca. While Rieti is short on money, that's the least of his problems -- as a gay Jew, he's an easy target for the fascist pogroms which have become commonplace in Europe, and working at Rome's lavish Cinecitta Studio is one of his few respites from the grim realities of life under Mussolini. Eager to turn his adaptation of Tosca into an international epic, Rieti hires Hungarian Lazlo Molnar (Andras Balint) to direct, and casts German Kristina Baumgarten (Catherine McCormack), Italian Maria Grazia (Surama De Castro) and British James Clavel (Jonathan Pryce) in the leading roles. Rieti also finds room in the cast for his handsome lover Renzo (Rupert Friend), but while the cast offers one another a certain grudging respect (and Baumgarten and Clavel enjoy a brief romance off-set), the tensions that have gripped the world can be felt on set, and fascist and anti-fascist factions arise among the crew. The turmoil is aided and abetted by the presence of Annibale (Ivano Marescotti), the film's chief backer and an ardent supporter of Il Duce, while free-spirited director Molnar makes no secret of his leftist views. The Moon and the Stars received its North American debut at the 2007 Palm Springs Film Festival. ~ Mark Deming, Rovi

Critic Reviews for The Moon and the Stars

There are no critic reviews yet for The Moon and the Stars. Keep checking Rotten Tomatoes for updates!

Audience Reviews for The Moon and the Stars

There are no featured audience reviews yet. Click the link below to see what others say about The Moon and the Stars!

The Moon and the Stars Quotes