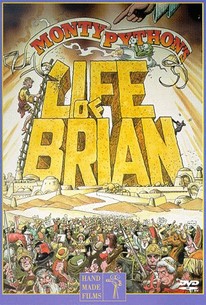 Critics Consensus: One of the more cutting-edge films of the 1970s, this religious farce from the classic comedy troupe is as poignant as it is funny and satirical.

Critics Consensus: One of the more cutting-edge films of the 1970s, this religious farce from the classic comedy troupe is as poignant as it is funny and satirical.

Critic Consensus: One of the more cutting-edge films of the 1970s, this religious farce from the classic comedy troupe is as poignant as it is funny and satirical.

Monty Python delivers the group's sharpest and smartest satire of both religion and Hollywood's epic films. Set in 33 A.D. Judea where the exasperated Romans try to impose order, it is a time of chaos and change with no shortage of messiahs and followers willing to believe them. At it's center is Brian Cohen, born in Bethlehem in a stable next door, who, by a series of absurd circumstances is caught up in the new religion and reluctantly mistaken for the promised messiah, providing ample opportunity for the entire ensemble (Graham Chapman, John Cleese, Terry Gilliam, Eric Idle, Terry Jones and Michael Palin) to shine in multiple roles as they question everyone and everything from ex-lepers, Pontius Pilate and haggling to revolutionaries, crazy prophets, religious fanaticism, Roman centurions and crucifixion, forever changing our biblical view.

Neil Innes
as Samaritan at the Forum

Life of Brian is an unexpectedly earnest, sweet-natured hymn to the idea of tolerance.

Brian's life is pure hell. And very funny to watch.

Just as wacky and imaginative as their earlier film outings.

Python successfully lampoon religious attitudes rather than religion itself.

Bad taste of this order is rare but not yet dead.

While the movie doesn't reinvent the wheel, it is professionally impeccable. [Full Review in Spanish]

Life of Brian is undoubtedly the greatest religious satire of all-time. Comedic gold.

While the most ambitious and thematically coherent of the Monty Python feature films, Life of Brian is also the least of them.

The Pythons' instincts strike home, not only in Brian's miserable failure to imbue his followers with some basic decency, but in the self-apparent barbarism that he's fighting against.

Only a select few of [Monty Python's] truest fans will appreciate the message they convey in a movie that actively mocks the concept of organized religion while making us laugh along with them.

Though considered one of the best Monty Python films, even gone as far as considered the best and funniest, its not as good as Monty Python and the Holy Grail, but its still an enjoyable film, and of course, very funny. Though being pretty immature with some of the comedy, it is enjoyable, and though being raised a Christian, I find this film very funny, even if it is somewhat controversial to my religion. Though it is considered a parody on the life of Jesus it is anything but, its focused more on the followers than Jesus, who is in it for only several seconds, and I love how well the followers work off with Brian and how blindly they're following someone who has done nothing spectacular at all, which is a very funny premise.

Partly a riff on the mythos of one little known desert prophet, and part riff on the multitude of film about said prophet, it has the feel of the class clown arguing with the homeroom teacher, and nearly is as Biblical. But mainly its just silly.

Life of Brian is a very funny film from Monty Python. I've seen all their films, and each are special in their own way. With this one, they really pulled off something highly entertaining and hilarious. Everyone one here brings something truly memorable to the screen, and with its plot, is a fine parody that generates lots of laughs. The film has plenty of great moments that really stand out. Monty Python are terrific comedians, and they deliver a film that is very funny from start to finish. If you loved every other film that Monty Python picture, you're sure to enjoy this one. I thought that this film was well crafted and definitely delivered on its ideas. The film is a comedy classic, and it's one of those films that any film fan should watch. Monty Python always had that eccentric touch to their humor and they pull off another great movie with Life of Brian. If you this sort of humor, you're sure to enjoy this comedy, and it is a highly memorable picture that is lots of fun due to a well written script, hilarious dialogue and top-notch performances from the troupe. Life of Brian ranks there as one of the finest comedies ever made. The humor is intelligent, hilarious and unforgettable. I think that this is one of those genre films that is much better than most comedies nowadays because this had better humor, while today's comedies tend to be pretty bland in terms of jokes. If you're looking for a film that has some very good jokes, and then check this film out, one of Monty Python's best. Life of Brian succeeds where many other comedies fail, this is a comedy classic that delivers the laughs and boasts a great story as well. Where can you go wrong?