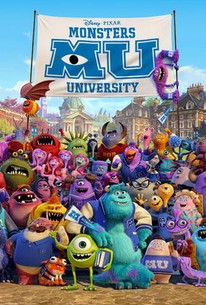 Mike Wazowski and James P. Sullivan are an inseparable pair, but that wasn't always the case. From the moment these two mismatched monsters met they couldn't stand each other. "Monsters University" unlocks the door to how Mike and Sulley overcame their differences and became the best of friends. -- (C) Walt Disney

Steve Buscemi
as Randy
View All

John Goodman Doesn’t Need a Renaissance (But He’s Having One Anyway)
All Pixar Movies Ranked From Best to Worst
Box Office: Dory Cruises to #1 & Nears $300M

It is essentially Revenge of the Nerds, with fur. And scales. And whatever gooey, gelatinous substance comprises the outer coating of various other oddball creatures in this crazy parallel world.

Studios don't often seem to be thinking about the ideal moviegoer, just about the maximum number of moviegoers ... Pixar is no different in that regard, but even in this relatively fallow period ... it's never stopped thinking the most of us.

So many movies, these days, are about nerds and their market value. Dan Scanlon's prequel is the newest, but already feels old.

It is funny. But the longed-for return to Pixar greatness seems as far away as ever.

It's not that Monsters University lacks any of the heart or wit of Pixar's finest achievements - the attention to detail and sight gags are as impressive as ever - but narratively speaking this is derivative in the extreme.

What follows is a perfectly pleasant pile of shenanigans that never once outstays its welcome.

Straight "A's" across the board, it's time to matriculate in Monsters University!

The excellent storytelling and pathos Pixar is so celebrated for is missing - and the film suffers as a result.

It is the kid friendly equivalent of a frat comedy, albeit with the genuine heart of a coming of age buddy pic.

A decent enough way to pass the time, but it pales in comparison to the modern classics that Pixar has delivered before.

A really thrilling prequel, always funny and exciting, that takes the clichéd premise of overcoming our own limits and turns it into endless fun - and it will leave you sure that Pixar is finally back on track after its two previous weak, forgettable entries.

The boys are back in town only its not a sequel but a prequel and we gonna see how Mike and Sulley became friends. Yep its back to school for this next adventure into the world of scaring. Mike is off to Monsters University to become a scarer, only problem is he's not very scary, but he's book smart, so he learns all he can on the art of scaring. Sulley is a bit of a jock and thanks to his privileged family background he has a good reputation and following. He's a good scarer and indeed scary but not so book smart, so in essence these guys need each other. Even more so after getting kicked off the scaring programme they must both work together with a team of nerds to win the scare games and get back into the scare programme (the word 'scare' is used by the bucket load in this). My initial thoughts on this were skeptical I admit, another prequel which seems to be the trend these days, why not a straight forward sequel. These thoughts were virtually obliterated as Mike jumps off the bus and enters into the Uni. Do I really need to talk about visuals here? one word...awesome! these animated films just get better and better. Everything just looks so damn real! the slimy monsters look slimy, the furry ones look perfectly furry, everything has such a solid realistic sense and weight about them its fantastic. The colours are bright, bold, vivid and gosh darn beautiful. On top of that the detail here is astounding, everywhere you look in each frame or scene there is something going on. Of course being set within a school there is plenty to create, plenty of visual gags, homages, in-jokes, parodies etc...the possibilities are pretty endless and sure enough its all covered here. Yeah sure a lot of it is cheesy and cliched, we've seen many of these high school-like pranks and party scenarios with jocks and dweebs before, its an old concept, but it all looks good enough to eat. Its actually pretty cool to see a very young Mike Wazowski, he looks so adorable, I really felt sorry for the little guy when he gets pushed around. Once he's grown up a bit and voiced by Crystal that cuteness falls by the wayside but never mind. I really liked all the other characters in the school, it must have been hard to create so many unique looking creatures, there are some that look a bit lame, a bit similar, a bit Dino-esque but in general a nice selection. The middle aged textile salesman monster Don Carlton was a great little creation although he does look somewhat like Mario. I really did like some of the fraternity monsters especially, the monster that looked like an eagle with horns and his mohawk/mullet-like hair. I also liked how they came up with stereotypical types of monsters which parody reality...the goth/emo kids, the girly cheerleader types, the porky kids, the poindexters etc...I REALLY liked the brief appearance of the scream can design teacher, like an overly hairy Muppet. It was also cool to see Randall back as for some reason I didn't expect to see this guy. So not only do we get to see how Mike and Sulley become friends we also see how Randall comes to hate Sulley. The scare games predictably do go the way you know they're gonna go, but the finale scaredown is cool and fun to watch. What I liked is the actual ending to the film doesn't play out as you'd expect, there is a little twist and the good guys don't totally win in every way you'd expect them too...which is cool. There are absolutely tonnes of good morals, good values and good lessons to be learnt in this film, a great motivational spirit lifter for all ages (especially the younger gen of course). Maybe a little bit more for the kids this time but still thoroughly entertaining, the perfect underdog story, or should that be undermonster? zing!

After seeing 'Frozen', 'The Lego Movie' and 'How to Train Your Dragon 2', my admiration for this movie has diminished severely. But hey, it was fun while it lasted.