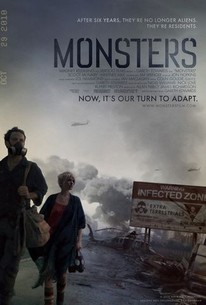 Critics Consensus: It doesn't quite live up to its intriguing premise, but Monsters is a surprising blend of alien-invasion tropes, political themes, and relationship drama.

Critics Consensus: It doesn't quite live up to its intriguing premise, but Monsters is a surprising blend of alien-invasion tropes, political themes, and relationship drama.

Critic Consensus: It doesn't quite live up to its intriguing premise, but Monsters is a surprising blend of alien-invasion tropes, political themes, and relationship drama.

Six years ago NASA discovered the possibility of alien life within our solar system. A probe was launched to collect samples, but crashed upon re-entry over Central America. Soon after, new life forms began to appear and grow. In an effort to stem the destruction that resulted, half of Mexico was quarantined as an INFECTED ZONE. Today, the American and Mexican military still struggle to contain the massive creatures... Our story begins when a jaded US journalist (McNairy) begrudgingly agrees to find his boss' daughter, a shaken American tourist (Able) and escort her through the infected zone to the safety of the US border. -- (C) Magnolia

A better-than-average debut by a filmmaker who merits watching. Let's hope that he keeps some of his indie spirit when Hollywood comes calling.

The most interesting thing here is the budget.

Too much of Monsters simply reminds you of other, better movies...

Monsters is part immigration parable, part war allegory with a dose of It Happened One Night and The African Queen tossed in.

This is a very postmodern sci-fi, with its downbeat approach to the monsters themselves, but with a hugely involving love story.

A decent movie with monsters in its theme, but with a very human conflict to consider. [Full review in Spanish].

[Monsters] makes us reflect easily on what we would do in the characters' situations and, as part of the overall feel, it gives us the steady course of two people getting to know one another in very credible fashion.

What kind of movie will best describe the Trump presidency for future generations?...

Beautifully shot and capably handled, Edwards' cinematic directorial debut is a heartfelt and touching exploration of two well-drawn, troubled characters, which just happens to feature extraterrestrials as a backdrop to the central narrative.

What starts as a great B-movie premise, unfortunately, degenerates into clueless moralism.

Those expecting a typical horror movie with aliens may be disappointed, for this is in fact a more dramatic and deeply absorbing low-budget film about love and the emptiness of life without it, while the monsters serve as a trigger for the connection between the two characters.

An ambitious, audacious first feature by Gareth Edwards, who is undoubtedly a resourceful and savvy filmmakers. Unfortunately, its heavy-handed political allegory (more Elysium than District 9) stilted acting, and low-budget effects badly damage what would have otherwise been an immersive, imaginative world.

I think the real "scary" thing is the misleading title and premise of the movie. At its core "Monsters" is a very human, relationship driven romance and survival/suspense flick last. The real beauty lies in the synergy of the film's writing as the characters unravel seamlessly with the mysteries and effects surrounding the extraterrestrial presence that lurks within central America. It's a great movie for many reasons but is more than often crippled by the same fact, it's very character driven. So if you're not interested in the protagonists or convinced by the romantic chemistry between Mcnairy and Able you'll begin to feel the toll of a meandering plot. Everything starts to slow down and pacing issues quickly become apparent. Nevertheless I can't help but appreciate the themes and character resolutions that come full circle during the films climatic end. Who are the real 'Monsters" indeed :]

If you want to see what can be accomplished with some dedication, a low budget and just a decent idea. Here you go! A solid sci fi picture.