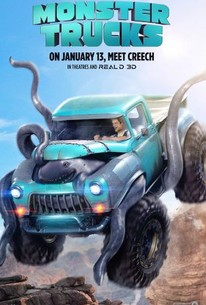 Critics Consensus: Despite flashes of inspiration, the singularly high-concept Monster Trucks shows that it takes more than monsters and trucks to create a compelling feature film.

Critics Consensus: Despite flashes of inspiration, the singularly high-concept Monster Trucks shows that it takes more than monsters and trucks to create a compelling feature film.

Critic Consensus: Despite flashes of inspiration, the singularly high-concept Monster Trucks shows that it takes more than monsters and trucks to create a compelling feature film.

Looking for any way to get away from the life and town he was born into, Tripp (Lucas Till), a high school senior, builds a Monster Truck from bits and pieces of scrapped cars. After an accident at a nearby oil-drilling site displaces a strange and subterranean creature with a taste and a talent for speed, Tripp may have just found the key to getting out of town and a most unlikely friend. Melding cutting edge visual effects and state-of-the-art CGI, Monster Trucks is an action filled adventure for the whole family that will keep you on the edge of your seat and ultimately touch your heart.

Lucas Till
as Tripp

Ryan Cowie
as Other Deputy

Ryan Cowie
as Other Deputy

How Family-Friendly are The Fate of the Furious and The Lost City of Z?
On DVD This Week: Hidden Figures, Lion, Toni Erdmann and More
Box Office: Hidden Figures Tops MLK Weekend Heading to $100M+

Audiences could do (and have done) a lot worse than this genial throwback to a time when Kurt Russell was Disney's #1 living, breathing attraction.

These elements are all well and good, but if you're above the age of 12, it becomes considerably harder to reconcile the sporadic tone-deafness.

Monster Trucks is a wreck, fueled by the crazy belief that noise and repetition can disguise the lack of credible writing, directing, acting and FX.

CGI creatures have more personality than the humans. Characters and logic are sacrificed for images and gags.

A film that makes good on its laughable, low-concept premise, one that relies on an out-of-fashion moral clarity that may actually benefit its presumed child viewer.

Monster Trucks is a throwback to the mid '90s VHS era. It's sweet, sincere and genuinely entertaining.

Most of it is scene after scene of Tripp and Creech being chased by bad guys and causing all kinds of destruction along the way.

Monster Trucks is undoubtedly an effort to capture the spirit of 1980s-era kiddie sci-fi; unfortunately, it's just not a very good one.

This heavily flawed family film retreads a generic formula so safely that the only way it would be acceptable is for it to be put into a time machine and left in the 90s.

Despite all the silliness, I began to get used to the ride.

Monster Trucks feels like it was tailor-made for boys under 10 everywhere. Boys like monsters. Boys like trucks. At least, that's what the thinking is for a studio executive.

Did the film fail? Yes. Was it that bad? No. Monster Trucks is not a bad film and deserves recognition by the audience it seeked. The central issue was the marketing and the high concept, both of these failed to engage the viewers. This is an adaptation of a toyline that I played with when I was young, but it wasn't a major seller. Transformers was able to entice younger viewers with the robots, Monster Trucks has creatures that hide under vehicles. The film attempts a storyline that works thanks to Till in the lead role. The creatures are cute and this could be one film that developes a following over the next few years. Wedge has a great history with fun concepts, look at Ice Age for an example, but he just couldn't mould a film out of the concept. Good fun film, but one that is unrewarding. 30/12/2018.

Over a year ago, I found myself scrolling through upcoming releases and became fascinated by a film called Monster Trucks. Without a plot synopsis, I was incredibly curious how they would pull off a film that is based around the fact that giant trucks leap over cars. Then the plot details were released, then the first trailer debuted, and then I found myself sitting in the theatre wondering why this film was ever made. It may be a harmless film for children between the ages of 4 and 10 to enjoy, but there is no way it's going to win over the parents that bring their kids or even the teenagers who like going to the monster truck events. There is a reason why this film was placed in January and here is why I believe Monster Trucks was doomed from the start. We've all seen this premise done a million times over, so what makes this interpretation so special? The answer is nothing. Tripp, a high-schooler who wants nothing more than to get away from his boring life, spends his Friday nights working at a junkyard, assembling a truck for himself. After an explosion at an oil facility, a creature escapes, wreaking havoc on the surrounding areas. Eventually finding a home under the hood of Tripp's truck, it becomes the engine he needs to power the truck, as well as an unlikely friend, whom also allows itself to be an icebreaker between Tripp and his friend Meredith. Sound silly? That's because it is. Due to the fact that this film is done with care and tries very hard to impress the younger demographic, it's extremely hard to criticize. Having said that, Monster Trucks really isn't that good of a film. From loud-mouthed bullies that are solely there to make our main character seem smaller, to generic plot devices like an absent father, to wanting to be his own man and prove he is worthy to the sheriff, there are so many laughable elements to Monster Trucks, and yet it plays out as if it doesn't even realize it clearly has these issues. The fact that every single scene is practically hiding a flaw makes this film look like a joke as a final product. Having said that, most young children will not have a clue that they have seen stories like this before, because it just embraces it. That is why this film is solely for children. I honestly feel that I would have loved this film if I had been a five year old sitting in the theatre. Also, there is one particular scene that bugged me. When the truck drives itself through the town for the first time in classic monster truck fashion, it drives over and crushes about 20 cars at dealership, and not a single person comes after them. Logic was completely out the window on that one. It should come as no surprise that trailers show far too much when it comes to any big-budget studio film that over-markets itself. Having said that, the trailers for Monster Trucks are some of the worst I have seen in a long time, due to the fact that it hides any slow moments and focusses completely on the action sequences. I think every single action scene was shown almost from beginning to end throughout the trailers, probably because the studio needed to showcase the "monster truck" element as much as they could. The studio themselves came out a couple months ago, stating that they whole-heartedly believed this film would be a failure. Well, if the opening weekend numbers are any indication, then an $11,000,000.00 haul for a film that cost the studio $125,000,000.00 should definitely be a wake-up call. In the end, I can't deny that this film tried its very best in making a competent picture, aiming itself at a very young demographic, but since it focussed so heavily on pleasing kids, there is not enough substance for adults to connect with. Sadly, there is more substance in Pixar films, due to the fact that they are children's films, aimed at all ages, helming extremely powerful stories. Monster Trucks squanders any promise it has and even though there is some clear effort put into the making of this film, there is not much to commend in the end. Overall, Monster Trucks boasts a few likeable characters, impressive visuals for what they are, and kids can have a blast with the action scenes and cute creatures, but as a film, it's just not very good. I admired the effort, but it's a flop in many more ways than one.