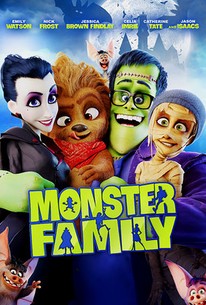 Critics Consensus: Monster Family promises a family-friendly animated monster mash, but succeeds only in delivering a viewing experience so lackluster that parents may find it genuinely frightening.

Critic Consensus: Monster Family promises a family-friendly animated monster mash, but succeeds only in delivering a viewing experience so lackluster that parents may find it genuinely frightening.

The Wishbone family is far from happy. With a struggling bookshop, an overworked husband, and two misunderstood teenagers, Emma is at her wit's end trying to be the perfect mom. After dragging her family to a costume party on Halloween night, they are cursed by an evil witch and transformed into a Vampire, a Mummy, a Werewolf, and Frankenstein's monster. Now Emma will fight to keep her Monster Family together and uncover the secret of their curse... eventually leading them to the Prince of Darkness himself, Dracula!

Ewan Bailey
as Renfield
View All

The Fifty Shades Trilogy Climaxes with a Whimper

The whole thing is exhausting, with too much slapstick, too few decent laughs and a care-y share-y message of family togetherness.

... a clunky, ungainly and misconceived affair, neither witty nor visually imaginative enough even to begin to compare with the best Hollywood animation.

An anything-goes hodgepodge in need of a smarter, tighter narrative and more deftly conceived and rendered characters.

Narrative logic leaps scupper story coherence, while the Tom Jones-loving Drac... seems like he's in a different movie to all the other characters.

With editing, pacing and screenplay all misfiring, it gets odder and less enjoyable.

There is an excellent chance that nobody will like this film, which tells, terribly, of a family turned into classic monsters -- not the children it is aimed at, nor the parents who sit through it.

It was brave of the producers to hire a co-writer called Catharina Junk.

Frankly, this lacklustre computer animated effort is about as original as a second-hand Halloween costume and a lot less fun.

This irritating hodgepodge is completely devoid of charm.

The fine cast is not matched by the material they're given. Tonally the film is erratic and the kid-friendly sideshow of fart gags and over the top slapstick will lose parents early on.