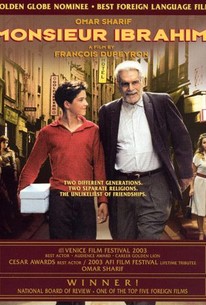 Critics Consensus: With tender, assured performances, Sharif and Boulanger elevate what might have been a rote coming-of-age tale.

Critics Consensus: With tender, assured performances, Sharif and Boulanger elevate what might have been a rote coming-of-age tale.

Critic Consensus: With tender, assured performances, Sharif and Boulanger elevate what might have been a rote coming-of-age tale.

A boy from a broken home finds a friend in an insular, spiritual shopkeeper in this period drama from writer/director François Dupeyron. Set in 1960s Paris, Monsieur Ibrahim et les Fleurs du Coran revolves around Momo (Pierre Boulanger), a young man who lives alone with his father in the bustling Rue Bleu district. Still smarting over the separation from his wife and other son, Momo's dad neglects his son in ways both minor and major, to the point where the teen spends most of his time out of school alone and isolated. He finds an unlikely ally in Monsieur Ibrahim (Omar Sharif), a Muslim shopkeeper who spends most of his days behind the counter of his store reading the Koran. As time passes, Momo and Ibrahim begin to bring each other out of his respective shell, sharing a series of everyday adventures, culminating in Momo's indoctrination into Ibrahim's faith. Monsieur Ibrahim et les Fleurs du Coran played the Toronto and Venice film festivals; at the latter, Sharif was given a lifetime achievement award for this and the rest of his career's work.

Isabelle Adjani
as The star

Guillaume Gallienne
as The Car Salesman

Guillane Rannou
as The Director

Daniel Znyk
as The Policeman

Francoise Armelle
as The Schoolmistress

Sylvie Herbert
as The Testgiver

Claude Merline
as The Notary

Pascal Vincent
as The Secondhand Bookseller

Maryse Deol
as Administrative Worker No. 1

Francois Toumaarkine
as Administrative Worker No. 3

Sylvie Debrun
as Administrative Worker No. 4

Eric Caravaca
as Momo at 30 Years Old
View All

That rare film about the sort of emotionally needy people who don't wear their neediness on their sleeves.

Tender but never sappy, Monsieur Ibrahim brings two people of vastly different age and background together in ways that are touching, and telling.

Contrary to expectation, it's neither a movie about religion nor the coming together of enemies. What it is, at heart, is a movie about love.

Sharif proves that at age 72 he can still command the screen.

Pierre Boulanger, who plays Moses, has an intelligent, awkward boyish charm, but most of the interest comes from Omar Sharif.

An appealing breeze of the French New Wave blows through the film.

Director Francois Depeyron evokes the look and feel of nostalgia extremely well, recalling films like 'Cinema Paradiso' for their wistfulness and charm.

Even when the material is rather thin and obvious -- and it sometimes is -- Sharif and Boulanger's performances make Monsieir Ibrahim agreeable.

A slight-but-charming French heart-warmer that gives Omar Sharif his best role since... well, since Lawrence of Arabia.

Sharif still has that twinkle in his eye and a commanding screen presence.

Sweet movie. Nice, easy pace. Heartwarming, and produces just the right amount of smiles. I like these kinds of movies....

"Mister Ibrahim and the Flowers of the Qur'an" is a French movie based on a book and a play by Éric-Emmanuel Schmitt. The award winning drama (César Award, Best Actor 2004: Omar Sharif; Chicago International Film Festival, Silver Hugo for Best Male Performance 2003: Pierre Boulanger; Venice International Film Festival, Audience Award, Best Actor 2003: Omar Sharif; nomination for the 2004 Golden Globe for Best Foreign Language Film) nostalgically explores life of a working-class Paris neighbourhood in the 1960s through growing of Moїse Schmidt (Momo), a young Jewish boy. He is fascinated by the elderly Turkish man, Ibrahim Demirci, who owns a grocery store across the street where Momo often shoplifts. Their relationship develops and soon Momo feels closer to Ibrahim than to his father... I would not like to spoil the watching of this heart-warming movie and I'll keep the rest of the story as a secret... :-) Impressive film which so realistically manages to takes us to the world where friendship is possible and natural between a typical teenaged boy, trying out his masculine prerogative (simultaneously unsure of what he wants) and older charismatic sage who is plainly desired father figure in this sentimental tale. I hope you'll have a chance to enjoy it!

Moses: When are you going to adopt me?

Ah, yes, if only life were always so easy. There is a definite fairy tale quality to this film. It's a nice, quiet story about love and acceptance. I'm sure they could have done more with this script, but I think they did not want to make it any more of a "message" movie than it is; there are no axes to grind here. This is less about the universal problems of racial or religious differences and child abandonment than it is about one individual finding his place in the world. A wonderful coming of age story, and a very fine performance by Omar Sharif.