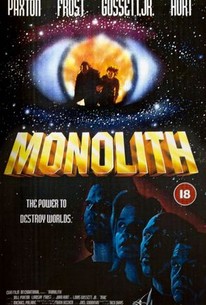 If you've seen 2001: A Space Odyssey, you know what a "monolith" is. What it is not is exclusively an extraterrestrial entity, as was apparently assumed by the producers of the 1993 melodrama Monolith. The story concerns two eternally bickering cops (Bill Paxton and Lindsay Frost), who stumble onto a government secret. It seems that a huge, malevolent monolith has come hurtling to Earth-and it's growing bigger and nastier with each passing day. Making matters worse, the evil being is invisible (thereby saving a fortune in special effects). Along with stars Bill Paxton and Lindsay Frost, Monolith fails to fully utilize the talents of supporting actors John Hurt and Louis Gossett Jr.

Steve Blackwood
as Bio-Team Member No. 1

Craig Diffenderfer
as Bio-Team Member No. 3

There are no critic reviews yet for Monolith. Keep checking Rotten Tomatoes for updates!

There are no featured reviews for Monolith at this time.