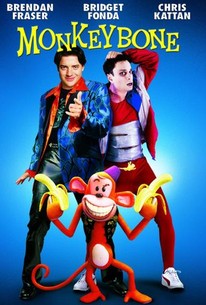 Critics Consensus: Though original and full of bizarre visuals, Monkeybone is too shapeless a movie, with unengaging characters and random situations that fail to build up laughs.

Critics Consensus: Though original and full of bizarre visuals, Monkeybone is too shapeless a movie, with unengaging characters and random situations that fail to build up laughs.

Critic Consensus: Though original and full of bizarre visuals, Monkeybone is too shapeless a movie, with unengaging characters and random situations that fail to build up laughs.

This feverishly energetic comedy combines stop-motion animation and live action from director Henry Selick, creator of The Nightmare Before Christmas (1993) and James and the Giant Peach (1996). Brendan Fraser stars as Stu Miley, a cartoonist who created a randy monkey character called Monkeybone that has taken off in popularity, making him a celebrity. Stu's set to launch a TV series based on Monkeybone and marry his beautiful fiancée Julie (Bridget Fonda) when he's injured in a freak accident that puts him in a coma. He travels to Dark Town, a holding area for the comatose who wait to either regain consciousness or move on to the afterlife with the help of Death (Whoopi Goldberg). Dark Town is also a realm where fictional characters reside and before long Stu has met the vulgar Monkeybone, who travels back to the land of the living to inhabit Stu's body. Aided by Kitty (Rose McGowan), Stu must find a way to reclaim his body and put Monkeybone back in his place before the raunchy primate ruins his charmed life. Monkeybone is based on the cartoon graphic novel Dark Town by Kaja Blackley. ~ Karl Williams, Rovi

It is a puzzling melange of live action and cartoon, real life and fantasy that is almost stupefyingly incoherent.

You can almost see money dripping off the walls of the sets and cybersets in this special-effects extravaganza.

The design is often brilliant, although the film is nowhere near as tasteless or funny as it ought to be.

Why do I still have a soft spot for this flick? Because there are glimmers of intelligence in the mess, because it must have driven the marketing department crazy, and because it fails so differently than all those run-of-the-mill failures.

This is a film for people with eyes but no brain.

Monkeybone doesn't make a lot of sense, and, worse, makes little creative use of the contrast between animation and action.

Starts out bad and gets progressively worse.

Fun fun fun, but not necessarily for all the family.

Primed to be dark, twisted, and playful -- all exhibited traits of the works of the director, animator Henry Selick -- it is instead juvenile, amateurish, and sloppy.

A bundle of chaotic energy signifying nothing.

The film Monkeybone is a raucous mess. Director Henry Selick mixes animation and live action to the noisy, clumsy detriment of both.

This was an enjoyable ride. It was just funny how the main act was holding his head on with anything he could find. I laughed every time he came up with something new and original to hold it up.

I watched this because of Brendan Fraser. But this was stupid.