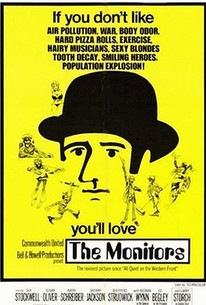 This feature stars members of Chicago's Second City, an improvisational group of comedy actors. Aliens invade the Earth, convinced they can help humankind overcome their problems. The "Monitors" guarantee results but must try to regulate all human behavior including love making, which leads to a mass defection from the movement. Larry Storch plays a military madman. Keenan Wynn plays a stuffy general, and Ed Begley is the President of the United States. Guy Stockwell, Avery Schreiber, Susan Oliver and Sherry Jackson also appear in this science fiction comedy that served notice that Chicago was second to no one in terms of making films. Odetta and Sandy Holt sing songs penned by Fred Katz in this offbeat feature.

Critic Reviews for The Monitors

To improve the lot of humanity...is just too altruistic to be regarded with anything other than suspicion

There are no featured reviews for The Monitors at this time.