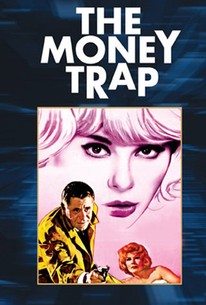 In this well-regarded film noir thriller, Joe Barron (Glenn Ford) is a police detective whose wife Lisa (Elke Sommer) has inherited a stock portfolio from her father. Joe and Lisa go on a spending spree, but when their new holdings fail to pay dividends, Joe finds himself deep in debt. Dr. Horace Van Tilden (Joseph Cotten), a rich doctor who caters to high-society clientele, shoots an intruder in his home, and Joe is assigned to investigate; Joe discovers that Van Tilden has a lucrative sideline selling drugs, and that the shooting victim was actually an addict looking for dope. When Joe learns that Van Tilden keeps his drug money in a safe at home, he sees a way to finally pay off his debts, but his partner, Pete Delanos (Ricardo Montalban), gets wind of Joe's scheme and demands a cut of the action. Matters become more complicated for Joe when he learns that the man Van Tilden shot was married to Rosalie (Rita Hayworth), whom he loved many years ago. The Money Trap was directed by Burt Kennedy, who was best known for his witty and unconventional westerns.

Than Wyenn
as Phil Kenny

Marya Stevens
as Woman in Bar

Carlita Martin
as Woman in Bar

Stacy King
as Woman in Bar

Ward Wood
as Man in Bar

Sallie Dornan
as Nurse
View All

Critic Reviews for The Money Trap

The Money Trap is a fair melodrama that could have been more if it had tried to be less.

Audience Reviews for The Money Trap

There are no featured audience reviews yet. Click the link below to see what others say about The Money Trap!