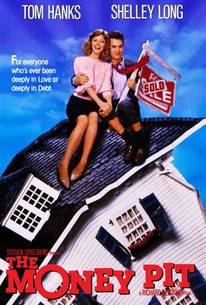 Attorney Walter Fielding (Tom Hanks) and his musician lover Anna Crowley (Shelley Long) are forced out of their home of two years by its owner, Mr. Crowley (who has been on a tour of Europe). With few alternatives, they decide to buy an incredibly cheap fixer-upper on Long Island and do the work themselves. Unfortunately, the couple soon learns that the house is a lemon, intent on eating up all their time and money.

Michael Hyde
as Driver of 18-Wheeler

Alan Altshuld
as Driver of Volkswagen

Critic Reviews for The Money Pit

A movie that contains one funny scene and 91 minutes of running time to kill.

The film would have been a lot better had there been a much stronger script that didn't seem to be straining to keep the basic idea alive.

Slapstick comedy about the problems that come with a couple's purchase of a dilapidated suburban house.

Memorably hilarious, with ace work by the two leads.

A stop-and-go feature that would kill as a short.

Sometimes having the right actors in the movie can make or break it....thankfully, Hanks and Long are good

Worth seeing just for Hanks' performance ... and very little else.

Audience Reviews for The Money Pit

Another good film, that could be much better.

One of the early Hanks comedies that cemented his position as one of the hottest upcoming comedy stars in Hollywood (after 'Splash'). Even though this movie has been overlooked for me its easily one of his better early movies. Although most of Hanks films have an abundance of heart this one also has a relatable subject in house renovation. Tom Hanks (Walter) and Shelley Long (Anna) buy a huge country mansion that would normally go for around one million, but because the place is falling apart (unbeknownst to them) its going for $200,000. The initial joke being in this day and age this ginormous property would be selling for a lot more than one measly million, but that's to be expected. The laughs come thick and fast as they realise the mansion is a lemon and is literately coming apart bit by bit. They have been well and truly had by the previous owner. Now far be it for me to nitpick at a light-hearted piece of comedy gold from the classic Tom Hanks 80's era but...lets go. The couple say they have no money whatsoever, indeed they have to borrow a shit-tonne just to buy the place, yet when they move in they are faced with massive repairs. The question that springs to mind is how on earth they afford to pay for all this. Sure both of them work so that will help but my God this mansion clearly requires some hefty workmanship that ain't gonna come cheap. Some of the things that go wrong are definitely laugh out loud worthy but Jesus the cost!! Huge holes in the floor, a new bath tub, new electrics, new TV, new front door and surrounding wooden frame, broken windows, an entire new chimney both interior and exterior plus new fireplace, complete new plumbing, huge new wooden staircase, holes in the roof etc...Take into account that this is a property bordering on a stately home and most fittings will need specialist attention and most probably with handmade craftsmanship to boot! The staircase alone would of cost an absolute fortune, and then the entire chimney stack!! So I am left wondering how they could even begin to pay for all this on top of the fact they have borrowed money to buy the house. Hanks character does put down an initial down payment of $5,000 but I doubt that would even begin to cover much. What is so sickly about the whole thing (so cutesy) is the fact that whilst all this is going on, in between all the horror that unfolds around them...both try and remain calm, expressing their love for each other and with Anna constantly reminding Walter everything will be OK. In reality I'm sure most people would have a break down. The weird aspect in the movie is that the building contractors appear to be this clan of fetish circus freaks. Big muscle men in bondage gear, little people and various types of punks all driving the type of vehicles you'd expect to find in the Mad Max franchise. Not really sure why they went down that route because it isn't particularly funny...just odd. I guess its suppose to freak you out because it looks like they're gonna ruin the place or squat there and the love birds will have more trouble on their hands. I think people can relate to this movie simply because many will have experience of buying a place and having problems occur, be it down the line or straight away. I'm sure some will have experience that will have been just as horrific as in this movie, so watching this will certainly hit home for some. Indeed it does make you wince whilst watching, seeing this amazing mansion slowly crumble bit by bit, it does make your palms sweat at the thought of the spiralling costs whilst at the same time make you glad its not real...or its not you. Its all harmless fun with some good stunts, a bit of slapstick, a lovely real time house presumably combined with sets and an overly energetic Hanks. Oh and what's this...Anna's ex-husband is the main psychotic German henchman terrorist from 'Die Hard', how bout that.

In one of Tom Hanks' earliest comedies he is buying a house together with girl friend Shelley Long just to find out it is decrepit behind the pretty facade. What follows are an hour of "what can go wrong, will go wrong", chain reactions and catastrophes. That is so cheeky in its predictability that you can't help but smile, or even laugh out loud a couple of times. The movie loses some of its anarcho humor in the last part when the loving couple has to fight for their relationship between the ruins. Still, overall a fun film even if clearly dated. There are two or three scenes that are so outrageously funny, you could watch them over and over again.

This was fun....made me smile. Looks a lot like the swedish movie "Drömkåken" (the dreamhouse). Tom Hanks and Shelley Long is a great duo