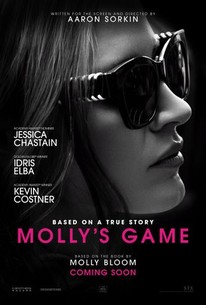 Critics Consensus: Powered by an intriguing story and a pair of outstanding performances from Jessica Chastain and Idris Elba, Molly's Game marks a solid debut for writer-director Aaron Sorkin.

Critics Consensus: Powered by an intriguing story and a pair of outstanding performances from Jessica Chastain and Idris Elba, Molly's Game marks a solid debut for writer-director Aaron Sorkin.

Critic Consensus: Powered by an intriguing story and a pair of outstanding performances from Jessica Chastain and Idris Elba, Molly's Game marks a solid debut for writer-director Aaron Sorkin.

MOLLY'S GAME is based on the true story of Molly Bloom, an Olympic-class skier who ran the world's most exclusive high-stakes poker game for a decade before being arrested in the middle of the night by 17 FBI agents wielding automatic weapons. Her players included Hollywood royalty, sports stars, business titans and finally, unbeknownst to her, the Russian mob. Her only ally was her criminal defense lawyer Charlie Jaffey, who learned that there was much more to Molly than the tabloids led us to believe.

New On DVD in April: Paddington 2, Phantom Thread, The Post and More
Where to Watch Every 2018 Oscar Nominee
2018 BAFTA Winners Announced

While the script crackles and excites, the film itself is profoundly uncinematic.

Most of the arias in Molly's Game don't achieve liftoff, and so neither does the movie.

If you're fond of Sorkin's script flourishes, then Molly's Game is for you.

This is a "Game" that couldn't be more fun to watch.

Whether we're lawyering up or narrating the drama of a night's play, it's hard to miss Sorkin's writing, but he has yet to find an equivalently distinctive style behind the camera.

What makes Molly's Game more than an entertaining, if enjoyably familiar big-screen Sorkin-fest (whip-smart characters spouting rapid-fire dialogue while slyly revealing personality traits) is that it's a profoundly emotional film.

Molly's Game is a brisk, energetic, engrossing work, and even in those moments when it isn't, Chastain keeps things interesting.

Molly's Game is a strong debut from one of Hollywood's most enduring scribes.

There are no Jedi, no Avengers, simply an intelligent story told from a very specific point of view. You feel like Hollywood doesn't make that kind of thing any longer? Go see Molly's Game, and you'll see that they never stopped.

A prime example of a slick, competent film being made all the more accessible through the sheer brilliance of its lead actor.

["Molly's Game" is] an utterly enthralling piece, from its first second to the last of its two hours and 20 minutes.

[Jessica] Chastain, [Idris] Elba and [Kevin] Costner's performance under the direction of Sorkin make the more than 2 hours go by at a good clip.

While Molly may not have been the most sympathetic character in the world, Chastain did an excellent job in the role. Sorkin was as sharp as ever.

The first five minutes, giving you Molly's sports background, are utterly fantastic. They set a pace the movie somehow keeps up, although the rest of the story contains mostly people talking. But the editing is so breathless and the writing so on point that it sometimes feel like an action film, going back and forth. The actors are top notch, especially Chastain and Elba, the camera work has a few trick up its sleeves too. For a topic that does not sound particularly exciting on paper, the result is an incredibly engaging and ultimately even moving film.

Despite a Freudian tête-à-tête between father and daughter close to the end that threatens to ruin the whole thing, Jessica Chastain is wonderful and makes this film entertaining enough no matter how exhausting it may feel to keep up with Sorkin's incessant, rapid-fire dialogue.

I may be a sucker for Sorkin's scripts, but there's no denying how great a writer he is, especially after watching this film, and it turns out, he is a pretty good director too. This is an interesting story about an incredibly interesting woman told in an interesting manner. Chastain is terrific and Elba is great, but the real star is the complex and engrossing life of Molly Bloom and Sorkin' screenplay about her.