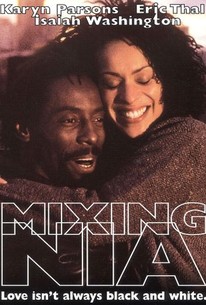 Bermuda-born Alison Swan, a NY documentary filmmaker, made her dramatic feature directorial debut with this comedy-drama, a low-budget look at racial identities. With divorced parents (white attorney father and black mother), Nia (Karyn Parsons) grew up in Westchester Country. Employed as an upwardly mobile advertising copywriter, she hangs out with both black and white friends. Irritated by an ad campaign to spur ghetto blacks to consume alcohol, she quits her job with plans to write a book. Stirring the racial mix, she sets out to find her own identity. Shown at the 1998 New York Women's Film Festival.

There are no critic reviews yet for Mixing Nia. Keep checking Rotten Tomatoes for updates!

There are no featured reviews for Mixing Nia at this time.